It's California: water, and a wolverine 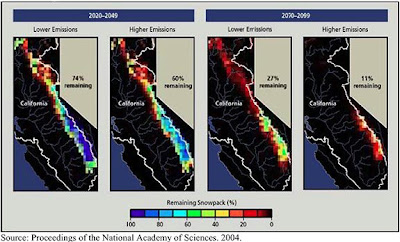 "Cry, the beloved country, for the unborn child that is the inheritor of our fear. Let him not love the earth too deeply. Let him not laugh too gladly when the water runs through his fingers, nor stand too silent when the setting sun makes red the veld with fire. Let him not be too moved when the birds of his land are singing, nor give too much of his heart to a mountain or a valley. For fear will rob him of all if he gives too much." [Alan Paton]
He had me at "California drought."

Ari Kelman of the most excellent Edge of the American West responds to "several requests for some California drought blogging," and I am so there. West coast water is a topic near and dear to my heart. We used to depend on well water every summer up at the cabin, for one thing. For another, I love roses. And hate high water bills.

"If you’re a salmon in California, this drought could well be the end of you. This year’s salmon returns were historic lows, and tepid reduced rivers may finish them off. However, if you’re a wildfire in California, dying forests in the Sierras are waiting for you!"

If you’re a farmer in California, or dependent on farming, the story is very different. The combination of drought and enforcement of the Endangered Species Act means that farmers are getting almost no water from the water projects this year (that may be revised to getting 5% of their usual water, because of the February rains). For many of them, this drought means putting in wells and fallowing everything but their orchards. Cattle and dairies are thinning their herds, because dry pastures are too sparse to feed their cows. Farmworkers in the San Joaquin Valley are taking the hardest hit, with unemployment over thirty percent in some towns.

I'm not dependent in any financial sense on my livestock, and don't have enough sheep to talk of "thinning the herd," but I'm giving up all but a few of my Cheviots — I can barely afford to feed them. Hay prices are unreal.

Drought? But... but... there's snow in the Sierras! Which isn't the same as "snowpack," unfortunately. You can see the white stuff in this short vid of a wolverine posing for a camera trap northwest of Lake Tahoe. Video from YubaNet.com, where you can read more about the handsome critter. I heart wolverines.

Wolverines are my absolute favourite animals.