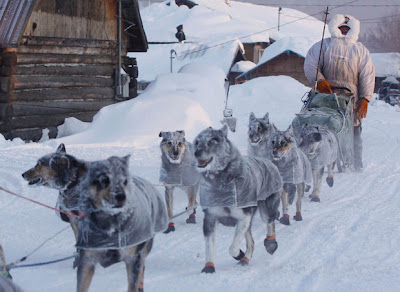 Cim Smyth and his team reach Kaltag after 150 miles on the frozen Yukon River, mushing into winds of up to 40 mph. Wind chills during the Iditarod this year have reached -45 degrees F. "Brutal winds have slowed the 37th Iditarod Trail Sled Dog Race to a crawl." ADN photos and race coverage here.
Three dogs dead, so far. Two from Lou Packer's team died during an awful night on the trail. Packer described the situation for a reporter, and I listened to the audio ["Lou Packer discusses the life-threatening weather"] and thought, two good dogs died on account of this chucklehead?! Packer zipped himself into his sled bag and apparently left the dogs outside in the blizzard to fend for themselves. From the ADN:

Iditarod officials confirmed the dog deaths and said necropsies were planned to determine how the animals died. Thin-coated huskies have been an issue of concern among Iditarod veterinarians in recent years. Concerns have been growing that such dogs might fall victim to exposure.

Gosh darn it [slaps forehead] — now you tell us!

Related:
Iditarod links, and a moment of silence, dammit
Posted by Luisa at 10:38 PM

Some of those deaths in those random cohorts would have been caused by stupid judgments made by the owners of those dogs.

On an annual basis, 2 dogs dying out of 1,000 over the course of a 10-day event equals roughly a 7.3 percent annual mortality rate, which equates to an average life expectancy of 13.7 years, which is probably a little bit better than average.

Now, granted, these are supposed to be the top canine athletes in the world handled by some of the top mushers in the world. We should expect better. But the vast majority of the dogs on the Iditarod trail finish alive, and very, very tired and happy.

All for a risk that's probably not a whole lot worse than just being a random dog on a random day.

OK, but these dogs are supposed to be so loved and cared for and such great athletes, yadda yadda, and two of them [Packer's dogs] froze to death.

According to the Google, "There were three deaths at all levels of [American-style] football last year [2003], two among the more than 1.5 million who play high-school and junior-high football." The numbers are lower than ever because of safety measures and rule changes. What if two out of every thousand students playing football died each year?

The founders of the Iditarod can't have foreseen that dogs would die every single year in this race as mushers of varying skill levels chase a trophy buckle or a big-money prize to Nome.

No dogs died in the diphtheria run the Iditarod commemorates.

And having said all that, Lance Mackey is pulling into Nome with 15 of the 16 dogs he started with [he pulled one at the Eagle Island checkpoint], many of them two-time Iditarod veterans, and I'm just in awe of what he and his incredible dogs have done.

Here's the most recent account I've read; I don't think there was anything that he did wrong except to get caught in a bad place by weather.
Anchorage Daily News:
http://www.adn.com/iditarod/2009/story/726933.html

Sounds like he really got himself in a pickle and was lucky to come out of it with just two dead dogs.

Luisa, I agree with you in principle that dogs shouldn't have to die in pursuit of a prize, and that given the caliber of dogs that are on the trail and the skill of the mushers, none should die. But I just thought it was worth bringing some perspective from an amateur actuary: that this is background noise in the lives of ordinary dogs.

Sorry Bill, you could even make that same point about dogfighting (most dogs didn't get killed, and they loved to fight so much...)

If speed at all costs is becoming so important that mushers are deliberately mixing in very fast thin coated breeds... and if this practice is not widely condemned by the mushing fraternity... then such races will be doomed. Mushers either care about their dogs and will work to disqualify dogs that are not physically suited to this extreme sport... or they don't.

Life is hazardous and sled dogs pull sleds in hazardous conditions. Sheep dogs tend livestock and I have one with a debilitating ankle injury incurred on the job. I know of a top hand beyond reproach whose dog died in its kennel after a competitive run. Another whose dog had a stroke after its run at Soldier Hollow one year. One of my dogs spent 5 agonizing days at death's door after a rattlesnake bite received up behind the house on a sunny Spring morning and Lad damaged his spine permanently causing irreversible paralysis while playing. What is safe? Not life and, personally, I'm much more concerned about millions of dogs that are killed in shelters around this country every year than I am about sled dogs doing what sled dogs do.