Not just Ingrid Newkirk, and not just any cancer, either.

Ingrid Newkirk of PETA and R. Rex Parris, the Mayor of Lancaster, California, both hope your dogs get bone sarcoma. Bone cancer, for crissakes! It's the law. Move out of town, minority scum, or we'll kill your Rottweilers and your pit bulls! Ingrid says: I love this law! Let's kill all the pit bulls!

This just in: when you slap a mandatory spay/neuter law on a breed like the Rottweiler [and in 2009, what society hacks off body parts as punishment?], you are sentencing dogs to death by cancer. Don't believe me? Here's the PubMed abstract. Excerpt:

Seriously, people — bone cancer. One in four Rotties will suffer from it, if spayed or neutered before a year of age. [Other large breeds are also at risk.] Lancaster wants them all "fixed" before they're four months old.

It should be glaringly obvious by now that Newkirk, the so-called "animal rights" pooh-bah, doesn't give a rat's patoot about dogs. She wants them gone from our lives, one breed at a time or in bunches, by lingering deaths or quick ones, by stealth or by whatever canine version of Jim Crow she can espouse.

And Mayor R. Rex Parris doesn't give a rat's patoot about his law-abiding fellow citizens. He's happy as a clam to impose a death sentence on their dogs and subject families to the anguish of losing a friendly companion to confiscation or cancer. Maybe you shouldn't have let your tattoo show when you took the dog for a walk, eh? Maybe your son shouldn't have dressed like a normal middle-school student the last time he was in the front yard playing with your new Rott mix, eh? That'll teach you. Lancaster doesn't want your kind.

And for the record: When Newkirk says, among other truthinesses, "Pits and pit mixes are responsible for more attacks than other dogs - not just fatal attacks, but ones in which an eye or limb or self-confidence is lost for life," she's lying through her teeth. She's talking out of her elbow. She has no verifiable studies — because there aren't any — to back up her rant o' crazy. Don't take my word for it: pick up the phone, you folks who call yourselves journalists, and run Newkirk's nutty quotes by the real experts at the CDC and the AVMA.


What sort of mayor writes a bad law with the intention of wielding it selectively against people he doesn't like? What sort of person tells lies in order to have good dogs taken from their families and put to death?

[And why, oh why is anyone still listening to PETA?] 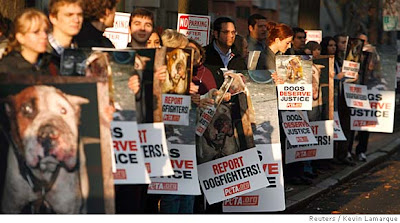 Related:
PETA wants to kill my dogs -- and yours
Dogs white people like
Posted by Luisa at 2:43 PM

I hate it when you sugar-coat your blog posts. You should let Newkirk have it with both barrels one of these days.

'Twould be poetic justice for Ms. Newkirk to be mauled and eaten by a pack of Rotties afflicted with osteosarcoma.

Except, of course, for the poor Rotties. How inexcusably tragic for them to suffer.

Being a Rottweiler owner, I'm aware of a similar study indicating that juvenile spay/neuter increases the risk of hemangiosarcoma as well.

What's sad is the number of pet owners who buy into the BSL hype, not realizing it's a tactic by the AR crowd to eventually make our pets extinct.

I have been surfing your site and saw a link to dogwise.com. You may be interested to know that many are boycotting Dogwise. Why? Due to their refusal to stop selling a book that peta endorsed. Dogwise stated that the book was good, and although the author, Alana Stevenson, made inappropriate remarks to endangeredownerblogspot.com they would not take the book off the market simply because "we" didn't like the peta affiliation.

Dogwise does not understand that we are literally fighting for our animals' lives. . Perhaps they will take note when their sales drop dramatically.

I hope you'll check this out and remove the Dogwise.com link from your website. I know what a pain it will be to list recommended books with another website, but no endorsement from peta should go unknown, or unpunished!

You'd like me to remove the Dogwise.com link from my blog, because out of the thousands of books and other items Dogwise carries, one got a positive blurb from PETA...?

For all I know, Dogwise carries books written by John Birchers and Scientologists and Brooks Range trappers who give 50% of their annual income to the Alaska Independent Party. Big whoop. Dogwise vets books, not authors' tax returns.

You have a problem with an author's wingnut ideology? Don't buy her book.

For those interested in learning more: author Alana Stevenson praises PETA here. Her book is here. [As you can see, Stevenson suffers from a severe irony deficit: she is posing on the cover with a pit bull.]

[In other news, this month marks the 20th anniversary of the fatwa by Ayatollah Khomeini requiring author Salman Rushdie's execution. We don't do shit like that.]

Thank you for that Luisa.

I am sick to projectile vomiting of the entitled masses who want to remove all things they find annoying from the world. NIMBYs, BANANAs, CAVE people and nannies - they're all terrified at the very prospect of being offended. Which really, when you think about it, is beyond ironic because they're offended by nearly everything.

A fatwa on them.

I'm curious as to what "inappropriate" comments were made by Alana Stevenson to endangeredowner?

You are so fab and I'm so glad I'm your sis.
LilyoftheNile and Thadeus shout out to cuz Smoky, et al.