The Bluegrass, and the 2008 National Cattledog Finals 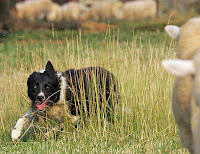 Trial of the year, sheepdog trainer/handler Robin French calls the Bluegrass, and I won't argue — I've seen the run order. I dream of heading east some spring to watch those household names [to sheepdog people, anyway] and their terrific dogs.

Robin French of Shoofly Farm [also the name of Robin's blog, with useful posts on training and handling sheepdogs] is running Spottie, Zac and Moss at the Bluegrass this year, and has promised "a full trial report when we get home." Robin writes:

It's the best trial of the year, even if my dogs don't end up totally on their game. Lots of good dog work and it's a real SHEEP trial, where the fresh sheep mostly sort out the dogs, at least on the first round, before they get more dog broke. I love watching this kind of trial, where you get to see so much more of what's really in the dogs and it's less about who handles best. I'll be glued to the sidelines for the first round, that's for sure!

A number of handlers at this year's trial are also talented photographers, and I'll be keeping an eye out for their photos.

In Torrington, Wyoming, the National Cattledog Finals are winding up: final runs for both Open and Nursery are this Saturday, May 17. You can follow the results here. An up-and-down week for my trainer Anna Guthrie, but a miracle her good dog Tick was able to compete after the nightmare a year ago. [I believe Tikkle is eligible for next year's Nurseries as well.]

Good luck to all, and take lots of pictures! [That's Denise Wall's Kate in the photo above — Denise is running Kate in this year's Bluegrass.]
Posted by Luisa at 10:49 PM

Luisa: thanks for a) listing us on your blogroll and b) for the great selection of topics. As you know we don't have sheepdogs, but have always admired great working sheepdogs. I only know of the Bluegrass from Donald MacCaig's books -- but hope to see it some day.

For some reason, I only just noticed that your background image is a map of Yosemite -- but from when and where?

Thanks for the mention - the trial report is up. It was a great week!