Where meat comes from 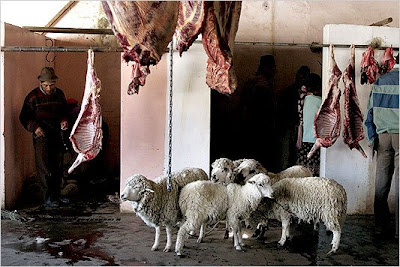 Zumbagua market, Ecuador. Photo by Peter Menzel and Faith D’Aluisio.
Peter Menzel and Faith D’Aluisio "sat down to a meal with 30 families in 24 countries, photographing their one-week food intake and talking to them about food, dieting, and shopping habits for their 2005 book Hungry Planet." From the NY Times Freakonomics interview by Annika Mengisen:

Q: On this blog, we talked about the possibility of slaughterhouses breeding violent, even homicidal behavior in people. From what you’ve seen around the world, what’s your take on this?

From Peter: I would argue that this is not the case in developing countries (in people who work in slaughterhouses or in the general population). Meat is valued, prized, and sought after, and there is a lot of respect for animals, along with a complete realization and understanding of where meat comes from.

But in the first world (to a lesser extent in Europe) large commercial slaughterhouses do numb the workers who must perform the same grisly task for endless hours.

I photographed slaughterhouses around the U.S. a number of years ago and saw what goes on. Pigs, cows, chickens, turkeys: an endless deconstruction line. It’s inevitable under those circumstances that workers remove themselves mentally from their physical tasks.

A bigger concern might be the fact that many Americans have no clue where meat comes from: does it grow in these Styrofoam trays?

I do think if you eat meat, you should be aware that you are participating in the death of an animal. How far that awareness goes and whether it influences how much, how often, and what kinds of meat you consume is a responsibility as well.

And from Rebecca King of Ardi Gasna:

I almost forgot the other major activity I've been up to lately--slaughtering and butchering my lambs from last year. I had experience breaking down a lamb carcass from my kitchen days, but the killing and gutting was new. I never would have believed it, but I am actually a gun owner now! My mom gave me a .22 automatic that belonged to her first husband about 50 years ago, and I've used it to put the lambs down quickly before bleeding them. I know some may find it morbid (although they themselves eat meat that someone else kills!), but I've discovered I actually enjoy slaughtering and butchering my own animals. There is a certain satisfaction in knowing that I was responsible for this animal from its birth until its death. I am also fascinated in the process by which a living thing becomes food that we eat. The lamb has been really delicious as well, some of the best I've ever had. The friends and family I've shared it with seem to agree, too.

Thanks for this, too. I don't know that I, personally, can use the word 'enjoy' to describe killing the gamebirds we do, but I definitely have a definite sense of satisfaction in preparing and eating the birds we harvest.

In rural Mongolia, herders will often pin a sheep to the ground, make a small incision below the sternum, then reach in and pinch off the aorta. The sheep's life ends with relatively little stress and pain. From what I gather, it's a regarded as a kind of pragmatic Buddhism -- respecting the life by taking it gently and literally avoiding shedding blood.