Industrial farms: "animal husbandry has been turned into animal abuse" 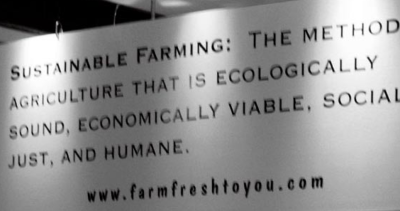 Where good fruits and veggies grow up. Where beef should come from. My blog: where dangling prepositions hang out.
You know sustainable agriculture is going mainstream when the NY Times [editorial: The Worst Way of Farming], Johns Hopkins and the Pew researchers put factory farms on the front burner. The report Putting Meat on the Table: Industrial Farm Animal Production in America is a joint project of the Pew Charitable Trusts and Johns Hopkins Bloomberg School of Public Health.

From the Pew Commission:

The current industrial farm animal production (IFAP) system often poses unacceptable risks to public health, the environment and the welfare of the animals themselves, according to an extensive 2½-year examination conducted by the Pew Commission on Industrial Farm Animal Production (PCIFAP), in a study released today.

Commissioners have determined that the negative effects of the IFAP system are too great and the scientific evidence is too strong to ignore. Significant changes must be implemented and must start now. And while some areas of animal agriculture have recognized these threats and have taken action, it is clear that the industry has a long way to go.

"Food animals that are treated well and provided with at least minimum accommodation of their natural behaviors and physical needs are healthier and safer for human consumption."

(Washington, DC – May 8, 2008) The response to the Pew Commission on Industrial FarmProduction’s (PCIFAP) final report and recommendations has been overwhelming. Influential elected officials, health, environmental and farm organizations and newspaper editorial boards are weighing in on the Commission’s report and recommendations, which, if followed, could help alleviate the negative effects the industrial farm animal production system currently poses on public health, the environment, rural communities and animal welfare. The report garnered so much attention that the White House Office of Science & Technology Policy invited PCIFAP staff to debrief several of its staff members last week on the Commission’s report. [Source] 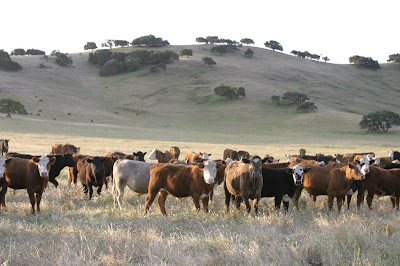 Photo by Richard Morgenstein for Morris Grassfed Beef. 'Our cows are never put into feedlots. They are born, raised and finished on California’s breathtaking Central Coast rangelands.'
Posted by Luisa at 10:47 AM