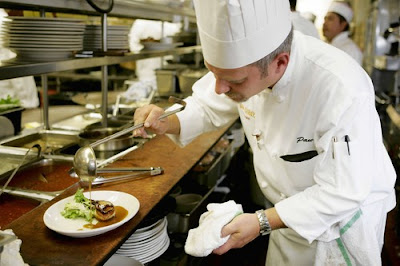 It's foie gras city. Chicago Tribune photo by Charles Cherney.
What can I say — the stuff's delicious. [It's even possible to produce foie gras without force-feeding the geese [ducks, on this side of the Atlantic] whose fatty livers wind up on the plate, according to farmers in Spain.] In any event, Chicago overturned its two-year ban on foie gras this week, to much gnashing of teeth on both sides of the debate.

"If I had to come back today as an American farm animal destined for the dinner table, I'd choose to be a Moulard duck raised for my fat liver in a heartbeat."

Ruhlman: In my opinion, the four farms that grow ducks for foie gras in this country -- especially the largest ones, in New York and California -- they ought to be made examples of by our legislators, not as places of animal torture, but rather as models of humane farming. Unlike factory hogs, which have their tails painfully cut off and never see the light of day before winding up as cheap grocery store pork, the billions of chickens that live packed wing to wing and live in their own ammonia-reeking waste, or the feed-lot antibiotic-laced beef -- if I had to come back today as an American farm animal destined for the dinner table, I'd choose to be a Moulard duck raised for my fat liver in a heartbeat.

Bourdain: Yes, it seems to me that the activists for whom the suffering of animals is unbearable, their lobbying against foie gras is not just bad time management, it's cynical time management.

Billions of chickens, hogs and beef are being harmed -- that's carnage on a far vaster scale -- but big agribusiness is a difficult and powerful target. They don't get much bang for their buck, from a political standpoint. It's much easier to go for the small artisanal farmer with little resources and no lobbying group in D.C.

And while I'm on the subject of food: how about those chemicals in non-stick cookware, eh? From The Ethicurean:

The study released last week also included some new and disturbing findings about the health effects of PFOA. Residents living near the DuPont plant who had high levels of PFOA in their bloodstreams tended to have lower levels of a protein that helps the body fight off bacteria and viruses. They also had reduced thyroid function. In kids, high levels of PFOA were associated with high cholesterol levels. Researchers fear this could lead to obesity and heart disease risk later in life … as if exposure to the rest of our dysfunctional food system wasn’t bad enough.

These impacts are scary not just because of what they’ve done to the workers and residents studied, but because PFOA appears to be one of the most “persistent” chemicals — chemicals that do not break down into less-harmful compounds over time — that scientists have come across. That means that the impacts they’re seeing now could be just the beginning. Here’s the Globe and Mail again:

In an ironic turn for chemicals that are used to make non-stick products… PFOA [and PFOS, a related chemical] have been found to have an extreme affinity to stick to living things and, once absorbed, are incredibly hard to shed, often taking decades to be excreted. “We’ve never seen them degrade under any relevant environmental conditions,” said Scott Mabury, a chemistry professor at the University of Toronto. “I often say they redefine persistence as we know it.”

It was not until May of 2000, 21 years after it first began testing workers, that 3M announced it was ceasing the use of PFOA. The reason? New tests had found it in the blood of people around the globe, including in places far from manufacturing facilities. Here’s 3M exec Charles Reich in the Washington Post the day after the recall: “The surprise wasn’t that it was in our workers — that’s something we’ve known for some time. It was a complete surprise that it was in the blood bank supplies” of the U.S., Japan, Europe, and China. Double awesome. And by the way, by “awesome,” I mean “mindblowingly terrifying.”

Cast iron is great - I use it all the time. Once they're cured, they become non-stick pans that actually provide some iron in the diet as well. You can buy them a t any decent hardware store or order online from Lodge (some cool shapes at their site http://www.lodgemfg.com/ ).

Stainless steel is good, too.

I have used non-stick pans a few times in my life but haven't found them that great overall. Plus, they kind of give me the creeps -and now I know why.

Thanks for the link! Dinner was prepared in a humongous cast-iron frying pan I unearthed in the pantry. Mmm, delicious! Cleaning that thing was my upper-body workout for the week -- hay bales weigh less.

Your comments on that chucklehead in Utah were brilliant, by the way. [stands, applauds]