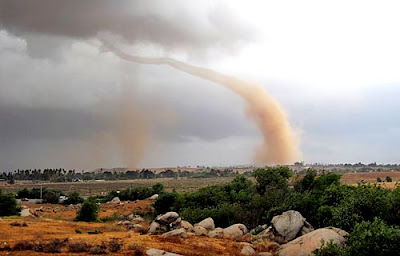 Nothing compared to the lethal tornadoes in Minnesota and Iowa, but a real twister: check out the home video in this L.A. Times link. Our SoCal tornado only flipped a big rig and derailed a train, but it added further weirdness to one of the weirdest storm systems I've seen in a while.

A week ago SoCal's inland valleys were a sweltering 100 degrees F. Then the temps nosedived -- look at Wrightwood: 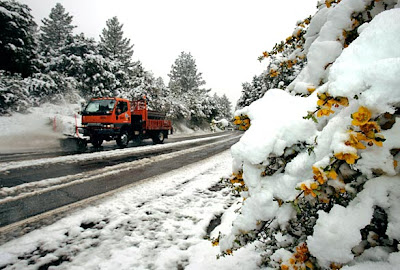 We had hail. We had rain by the buckets. Down at the farm some wheelbarrows had been left standing outside the barn, and they were filled with rainwater. There was thunder and lightning: thunder that didn't just crash and boom, but kept on rumbling for what seemed like ages. The collies have been happier.

As everyone knows, the Inland Empire always gets rain this time of year because the Orange Show Fairgrounds were built on the site of an ancient Indian burial ground. [Shut up.]

Today there are just a few clouds in the sky, but it's cold enough this morning that the pit bulls are bundled up in their faux sheepskin beds and I'm hunting for earmuffs. OMG, it's 50 F degrees on the back porch. Unreal.

Read this climate change classic: Cloudy with a Chance of Meatballs.

Email ThisBlogThis!Share to TwitterShare to FacebookShare to Pinterest
Labels: weather