The natives are restless 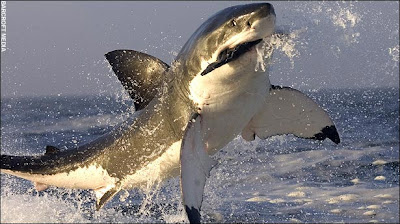 Shark 1, seal 0. Photo by Chris and Monique Fallows, via The Telegraph.
Grizzlies, mountain lions, rattlesnakes, coyotes, sharks... Do you ever get the feeling it would be safer to stay home? Well, kids, let me disabuse you of that notion: 402 Americans drowned in their bathtubs in 2004; 1,638 died after falls on stairs or steps; 596 suffocated in bed, oy. So go for a swim in the ocean, already. Go for a hike in the mountains. I'll be right here when you get back, because I'm, ah, expecting a call. And then I'm — washing the dogs. Yeah, that's the ticket.

Seriously, sharks don't scare me a bit [and why should they, when I stay as far from the ocean as possible]. More precautions: I don't pick up rattlers, which effectively eliminates the odds of my being bitten by a poisonous snake. Coyotes leave me and my stock alone [knock wood]. Bears and lions, on the other hand, scare. me. to. pieces. PSA: When house-sitting alone at a remote ranch in lion country, do not, under any circumstances, watch The Ghost and the Darkness. OMG, that was like the scariest movie ever.

I live in the 'burbs, and a week or so ago a big mountain lion was killed crossing the freeway about four miles from my house. [Wildlife corridors in this neck of SoCal? Surely you jest.] A coworker saw the lion's body at a local ranger station, waiting to be shipped to a taxidermist [the lion, not my friend]. He said the animal was scarcely marked from the impact, huge -- "seven feet, 180 lb" -- and beautiful. The lion made it safely across the westbound 10 but was killed trying to cross the eastbound lanes: that is, he was traveling from my side of the freeway back to the foothills/forest side. I wonder how much [if anything] last year's fires have to do with this activity. All you big predators stay on the Fawnskin side of the lake this summer, please.

From The Devil's Teeth:

According to Scot and Peter, the Queen Annihilator of Surfboards was a shark named Stumpy. Stumpy was nineteen feet long and weighed five thousand pounds, and when she was in residence, she ruled the Farallones. "She was the only shark that I think understood who we were, what we were trying to do," Peter recalled. "And she didn't care for it. When Scot was first putting out the decoys Stumpy would just come up and destroy them, more because she didn't like them than because she was fooled by their silhouettes."

Stumpy patrolled a swath of sea along the east side of the island near the main boat launching spot at East Landing. For prey, this was not an advisable route onto shore. "No seal gets by her," Peter said. And while other sharks would take twenty minutes or more to consume their kills, Stumpy could polish off a five-hundred-pound elephant seal in three minutes flat. Though the distinctively cropped tail fin that earned Stumpy her name hadn't been spotted for several years, Scot and Peter still talked about her with a respect that bordered on awe.

Apex Predators
[For the two people who may not have seen it: the Apex Predators site has breathtaking photos of great white sharks hunting seals off the South African Coast.]

Coyote and rattlesnake posts in the pipeline.
Posted by Luisa at 7:11 PM