How to create a working stockdog 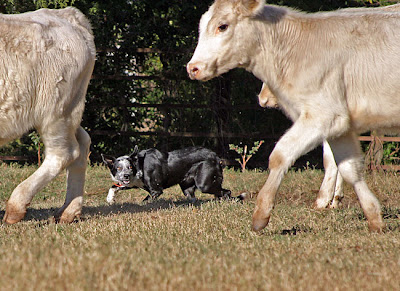 The border collie above is Norma Brice's Jill. [Photograph by Denise Wall - used with permission.] You can click on the photo for a larger view.

From the Science Section of today's NY Times --- Dog Breeders Apply Precision to an Old Art:

Many breeders hope this new effort to corral nature will weed out the numerous recessive diseases that plague purebred dogs after generations of human-imposed inbreeding. But some question the wisdom of escalating intervention. Mark Derr, an author who has written about the history of dog breeding, urges everyone to reconsider the goal of genetic purity.

“I always use dogs as the example of why we don’t want to be mucking around with our own genome,” Mr. Derr said. “These people are trying to use DNA tests to solve problems of their own making.”

Still, some proponents of using the DNA palette are proposing to go even further. Dr. Neff, the University of California researcher, has proposed screening successive generations of dogs with DNA tests and breeding only those with genes for traits like stamina and scent detection to create a new breed of dogs to patrol subways and airports. It could be done within a few years, he said, instead of the centuries it took shepherds to breed the sheepdogs that patrol their flocks.

If Dr. Neff imagines that DNA testing might have reduced the development of the working sheepdog from several centuries to a few generations, I'm afraid I have bad news for him. "Herding" isn't a single behavior, or three, or four, or two dozen.

It isn't a crouch: many of the finest stockdogs are upright workers. It isn't the famous border collie "eye": some of the best working dogs are "loose-eyed." "Herding" isn't simply truncated prey drive: one of the most popular working sires two [dog] generations ago was a lamb-killer, and if he were still alive, I'd breed the right bitch to him in a heartbeat. It isn't pure speed, though some collies seem as fast as greyhounds. "Herding" isn't trainability: golden retrievers have that, and no one sends goldens half a mile for range ewes or expects them to manage cow/calf pairs. "Herding" isn't a willingness to grip, or the lack of a grip. It isn't an excess of drive: pit bulls and Iditarod sled dogs are as keen to do their work as border collies, but who would send a racing sled dog for sheep?

"Herding" has nothing to do with coat length --- but it may have something to do with coat color. It may be related to genes that produce lax hip joints in puppies. "Herding" may be linked to the recently discovered gene for CEA [Collie Eye Anomaly], a disease which can result in blindness. It may be related somehow to the genes responsible for noise sensitivity and a terror of thunderstorms.
"Herding," in other words, is an extraordinarily complex mix of genes regulating a large number of traits, some of which appear at first glance to have nothing to do with working stock at all.

But what might happen to the border collie's working ability if a DNA test allowed breeders to eliminate dogs with sensitivity to loud noises? What working traits might change or disappear?
From a 1994 article on the genetics of border collie behavior:

Imagine, if that simple quiet crouch behind the sheep depends on four separate genes, what must be involved in the entire collection of herding behavior: eye, balance, power, biddability, etc. And what must the chances be of accidentally combining the right factors to remake a herding dog, if those combinations are ever lost?

The complexity of the genetics of behavior is probably not a surprise, but it is the basis of the entire argument that the performance dog must be bred for performance at every generation. The more genes are involved, the more different combinations are possible, the more easily they become separated and lost.

Sheepdog breeding is as much of an art these days as ever. Want a great border collie? Talk to the men and women who've worked generations of their good dogs on stock. Be familiar with the science, but put your trust in the Scots shepherd and the North Dakota rancher.
Posted by Luisa at 5:59 PM