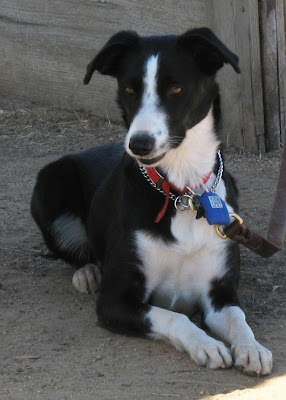 See that little dog in the photo? I'm crazy about her. (The snapshot was taken at an AHBA trial in Jamul last November. You can click on the photo for a larger view.)

Let me count the reasons I love the landshark:
She's an assertive, happy little animal, and she has a personality larger by several orders of magnitude than most dogs I've met. "So you don't think she's a whippet/Jack Russell cross?" I asked Jack Knox after he worked her, and Jack said, "Oh, no -- she's got some breeding."

Heartbreaking, a bit, that I'll never know more about her pedigree than what Jack said: "She's got some breeding."

No one expects to find a genuinely useful stockdog in a pound or shelter or rescue, but I knew the first time I saw this little dog that she would work. She was a terrified stray with a badly broken foot --- she'd been hit by a car --- but I knew she'd work livestock, and I knew that she'd be my girl forever. I just knew. Did I mention that I love her tons?

Over the past couple months my little dog has held sheep for the shearer, for shots, for drenching, and for more shots. Last week a vet and I were drawing blood for CL testing, and my girl had to walk straight in and press sheep against us, then release the pressure a bit and keep things calm and still while the needles were in play. My Cheviots have stared dogs out of the pasture, and a few of the ewes will try to hammer my other border collies, but they don't challenge this one. It was mostly close work, and my girl was was a peach. (All the blood samples were negative for CL, according to the Davis lab. I tested my ewes because a Boer goat on the property, part of a student 4-H herd, had tested positive for the disease.)

I was especially happy that my little dog moved sheep with such confidence around a couple busy strangers, and that she was willing to let the vet pat her while she sat in the water trough after we were done. Not bad for a stray that used to be terrified of people. I hope she'll do an 800 yard outrun on a USBCHA Open course someday --- but she's my good right hand on the farm now, and I'm feeling the love ;~)

(No, the blue neoprene thingy on the landshark's collar isn't an anti-bark shock device. [People have asked.] And the slip collar wasn't for training, but to prevent her from bolting in a blind panic if she got spooked. As I said, she used to be terrified of people. My dogs usually don't wear collars in the house or at work on the farm.)
Posted by Luisa at 10:44 PM