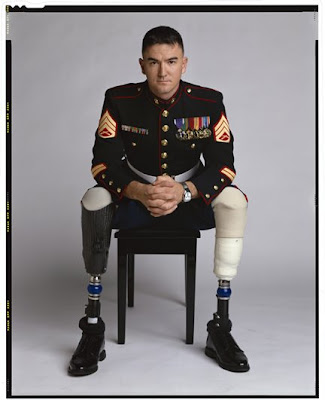 The VA estimated that in 2007 it took an average of six months to reach an initial decision on a benefits claim [...] and processing appeals takes years.

"This is a national embarrassment," said [attorney Robert E.] Cattanach, a Navy veteran with a son who has served two Army tours in Iraq. "Every day that goes by that this isn't fixed, people's lives are being changed," he said, recalling his effort to obtain benefits for a veteran who committed suicide before his case was resolved. [Source: today's WaPo. Full article here.]

An excellent proposal from hilzoy:

While a veteran's disability claim is being processed, that veteran doesn't get disability. S/he has to live on a fraction of his or her active duty pay, which would be OK for someone who could get another job, but is not at all OK for someone who is disabled. As I wrote last June, it doesn't have to be this way: rather than putting the burden on vets to prove their disability, we could presume that their disability claims were true, and then audit a subset of them, the way we do with taxes. (This is an idea I got from Linda Bilmes, here.) That way, vets would get the money they are entitled to from the outset, rather than having to live off friends and family while the VA slogs through their mountains of paperwork.

This is the least we owe our nation's veterans. "On this Veterans Day, let us rededicate ourselves to keep a sacred trust with all who have worn the uniform of the United States of America: that America will serve you as well as you have served your country." [Barack Obama]
Posted by Luisa at 1:02 PM