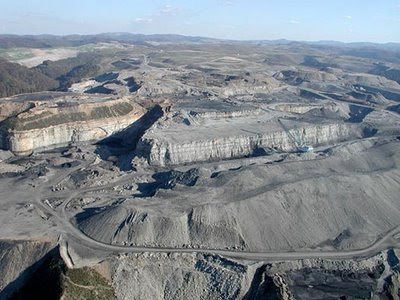 What was once Kayford Mountain, West Virginia. [Source: Julie Zickefoose.]
Just how much harm would the Bush/Cheney administration like to inflict on the environment before a new [and, one hopes, vastly better] administration takes office? A world of hurt:

The White House is working to enact a wide array of federal regulations, many of which would weaken government rules aimed at protecting consumers and the environment, before President Bush leaves office in January.

The new rules would be among the most controversial deregulatory steps of the Bush era and could be difficult for his successor to undo. Some would ease or lift constraints on private industry, including power plants, mines [see photo above] and farms [Concentrated Animal Feeding Operations].

Those and other regulations would help clear obstacles to some commercial ocean-fishing activities, ease controls on emissions of pollutants that contribute to global warming, relax drinking-water standards and lift a key restriction on mountaintop coal mining.

Once such rules take effect, they typically can be undone only through a laborious new regulatory proceeding, including lengthy periods of public comment, drafting and mandated reanalysis.

Par for the course, I guess:

iLoveMountains.org [Plugged in my zip code and discovered that Southern California Edison - my provider - buys coal from companies engaged in mountaintop removal. In every sense, this concerns me. It concerns all of us - so let's do something about it.] 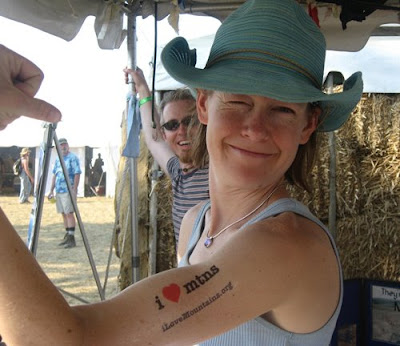 Can't bush be reined in? Isn't he technically not the prez after Tuesday? Won't he need votes to pass his garbage? Is he that much of a sociopath? Am I asking too many question? Here's another one: WTF?