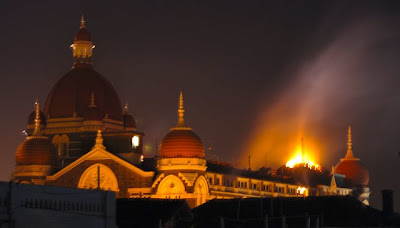 I wish I could reach out and for just one moment hold the hands of the woman in this AP photograph. Maybe shed some tears on her shoulder. But I do not know what I would say to her. I do not think she would want me to say much. The expression on her face matches the feeling I have at the pit of my stomach and in the depth of my heart. I think - I hope - that she would understand how I feel. I can only imagine what she is going through.

And so, in prayer and in solidarity, I stand today with Mumbaikars everywhere. In shock at what has happened. In fear of what might happen yet. In anger at those who would be so calculated in their inhuman massacre. In sympathy with those whose pain so hurts my own heart but whose tears I cannot touch, whose wounds I cannot heal, and whose grief I cannot relieve.

From the post I am a Mumbaikar: In Prayer and in Solidarity, by Adil Najam of All Things Pakistan. Read the whole thing at the link.

Citizen journalism at its most immediate: photos and updates from Arun Shanbhag, an assistant professor at Harvard Medical School who lives in Boston but was staying with family in Mumbai at the time of the attacks. As always, Flickr has more.

And Freddie deBoer [who is young enough to be my great-grandson, and possibly even younger than that] shows why he's in the sidebar with this post. Excerpt:

So there's about 1 billion Muslims in the world. A billion. A billion is a lot. What would a billion man plot look like, exactly? How would they communicate? Coordinate? I mean if you could really get a billion people together to attack Mumbai, you might as well try to take over a whole country. Ah, but maybe by "are behind" he [Rod Dreher] means "support". That kind of contention is thrown out there all the time, of course, and it has the virtue of requiring no form of proof whatsoever. Just like the contention "The average Palestinian would murder every Jew if he could," this kind of statement has no referent, invites no verification, requires nothing but the author's say-so and the guts to think you can leave it out there, orphaned and unsupported. This is non-falsifiable nonsense. I'm sure, say, the thousands of impoverished Thai Muslims living along the coast with no television or newspapers would be surprised to learn that they support a terrorist attack they've never heard of. Dreher has left himself an out, here, but he's done it in about the weakest form possible: possibly most Muslims weren't behind these attacks. Mmmm.

But, today, I have no words of analysis. What words can make sense of the patently senseless? I do not know who did this. Nor can I imagine any cause that would justify this. But this I know: No matter who did this, no matter why, the terror that has been wrought in Mumbai is vile and inhuman and unjustifiable. And, for the sake of our own humanness, we must speak out against it.

And, so, to any Mumbaikar who might be listening, I say: “I stand with you today. In prayer and in solidarity.”

Baruch Dayan Emet: Blessed is the true judge.
Posted by Luisa at 2:28 PM

Email ThisBlogThis!Share to TwitterShare to FacebookShare to Pinterest
Labels: news

It's so surreal and so heartbreaking. I can't stop watching the news. I *hope* this starts spinning toward the positive because I truly fear if it goes the other way.