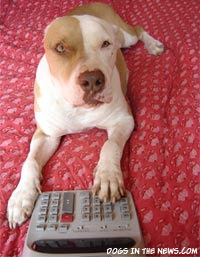 I'm working on it.

A farmer is wondering how many sheep he has in his field, so he asks his sheepdog to count them. The dog runs into the field, counts them and then runs back to the farmer.

[Classic joke, and sweet photo, from the good folks at Dogs in the News.]

Michael Vick has been held to a promise he made in court: he has deposited a cool $928,073.04 into an escrow account to provide for the lifetime care of the pit bulls taken from his property last spring.

But the government isn't paying -- Michael Vick is paying. And he had the option, during his salad days, to fund any number of worthy causes rather than siphon God knows how much into his dogfighting habit.

And yes, it seems like a lot of money -- unless you've left three dogs at a good boarding facility for a week, lately, and winced at the sight of the bill.

Let's use boarding kennel prices to estimate the cost of care. In my neck of the woods a decent boarding kennel charges at least $20 a day, more for extras like individual exercise, special medications and grooming. Even a multi-dog discount won't save you much. Let's pretend you could find a boarding facility charging $15 a day. That's $5475 a year, and $43,800 for eight years. [My oldest dog lived to sixteen, and quite a few live longer.]

If Michael Vick had been found guilty of torturing just one dog, and had agreed to pay for that animal's lifetime care, the bill would be [based on the figures above] just $43,800 -- and I expect people would be demanding that Vick fork over quite a bit more. But Vick chose to mistreat over fifty dogs. $43,800 for 50 dogs works out to $2,190,000 -- more than double the amount Vick was actually required to pay.

What do you know of oprah coming out on her show and saying that dogfighting is part of mike vick's culture so he should be forgiven? I don't want to misquote her, I just heard it referenced a few times and wanted to see if someoneone could substiantiate
tommy@hollywoodfeed.com