Coming soon to a neighborhood near you: Son of Congo 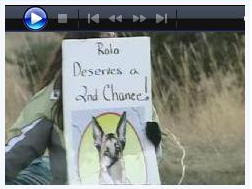 Click here to watch the video.
Seems to be working in New Jersey, so Colorado "animal activists" are following suit, so to speak: the owner of Rolo, a German shepherd condemned to death after attacking a neighbor, is staging rallies in his defense.

An Arvada woman who was bitten by a German shepherd has been getting hate mail and threatening messages from animal lovers.

After Kathy Hardin was bitten July 1, a judge ordered the dog be put down following statements from neighbors who claimed the dog acted aggressively.

But since then, Rolo's owner and animal activists have been protesting, saying he's not dangerous and that this was the first time he's bitten anyone.

Hardin's attorney said she's been harassed so much that she and her family are moving out of the neighborhood.

Weren't all those Colorado pit bull bans supposed to prevent dog bites...? [Seriously, the cretins behind the Denver ban have killed more dogs than Michael Vick: killed them not for dangerous behavior or poor temperaments, but because of the way they look. Heartbreaking -- and very scary.]
Posted by Luisa at 10:10 PM