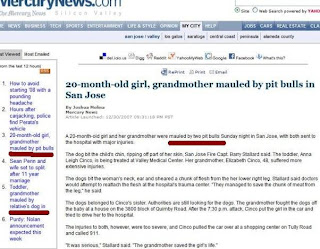 Er, make that one pit bull. A female pit bull. No, a male. Wait a minute -- it was a boxer mix. Or not. OK, we think it was a male pit bull/boxer mix, but the reporters are all so PC these days, and anyway, according to a county administrator, "The more dominant breed is pit bull." Whatever the hell that's supposed to mean [and yes, I'm being facetious. We all know exactly what it means: it's the canine version of the One Drop Rule].

When it comes to pit bulls, nothing says "high standard of journalism" quite like the San Francisco Comical Chronicle and the San Jose Murky Mercury News. What a shame the original article and 10+ pages of comments were deleted from SFGate after the dog became a boxer. "I have a gun, and if some filthy pit bull sets foot in my yard, it's head will be hamburger!" Right, pal, unless the grammar police bust a cap in your apostrophe first. [I think filthy pit bulls are kind of adorable: see right sidebar.] On the Murky News the comments have taken a predictable turn:

All pitbulls and their owners should be put down. They are both stupid and vicious

To Truthful, You have a lot in common with the vicious pit bull who attacked that defenseless child, you're both halfbreed uncontrollable (mixed) animals who should be euthanized. Be not so proud of your uncivilized race because you will never be a proud American. Either deport all Mexicans or euthanize them!!

Blah blah blah eyeroll. The Murky News is trying to delete the most rude, off-topic comments as soon as they're flagged --- don't do it, Murky drones! This is thesis material!! [Honestly, issues of race and class play a huge role in the pit bull debate: a largely unspoken role, no thanks to politicians and most reporters.]

WHY, when this breed is so clearly prone to be unreliable and when their physique makes an attack so serious, does the Silicon Valley Human Society continue to adopdt them out? Why aren't any pit bulls and pit bull mixes put humanely to sleep when turned in to the humane society?

Gee, I dunno --- could it be because many pit bulls are, in fact, more reliable than anything, and make wonderful companions?

Fave quotes of the day:

Greg Van Wassenhove, director of animal care and control in the county, said an investigation into the attack is ongoing. However, in cases like this one, where dogs are present at family gatherings, animals can view small children as "threatening their territories."

"That is the most likely scenario," Van Wassenhove said. "We don't expect a 20-month old child to provoke a dog."

Of course not, Greg! A twenty-month old child couldn't possibly do anything to upset a dog! [/sarcasm]

This morning four dogs circled the [family's] three-story main house [...] The property has a private easement snaking up to the house, which is nestled in the foothills. The dogs came charging out of the property, snarling and barking at members of the media in their vehicles.

OMG, "charging," for real? Do you mean these dogs actually barked at strangers on their property? And growled and snarled? (Congo, is that you?) I need to sit down.


So the Old Year fades away with more evidence than ever that people are forgetting what dogs are and how they behave, while groups like PETA and the HSUS bankroll spay/neuter laws and do their best to eradicate the domestic dog "for its own good, poor thing." Big dogs: too threatening. Medium-sized dogs: too boisterous. Small dogs: too, um, small liable to spread germs, ick.

Yes, dogs chase cats and "charge" at things. Some hate to be bothered when they're eating. Most bark at strangers. [The filthy pit bull in the sidebar is no watchdog -- she'd be delighted to let the axe-murderer into my home at midnight. Then my quiet collies would kill him. I'm joking, homeowner insurance people.]


This New Year's Eve I'm hoping for peace [I'm a hopeful type]; for the health, safety and happiness of everyone I know and pretty much everyone I don't; for leaders who do justly and love mercy; for mild, contented sheep and tired, happy dogs; and for firecrackers so far away, tonight, that none of my collies can hear them. Also: for the stick-to-it-ive-ness to write often about real dogs and real dog behavior -- and link often to many of the fine blogs dedicated to nature, the environment, and, of course, real dogs.

ETA: More here, with a video showing one of the dogs involved. 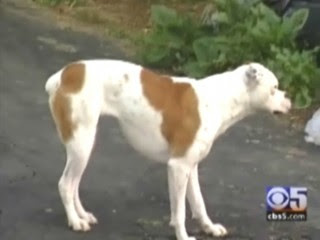 It's so cool that the story was repeated about 50 times all over the continent as a 'pit bull' attack...now the yinyangs think there were 50 attacks this week because they only read the headlines, no?

As for those comment boards, I have to be in the mood to read them. They highlight how ignorant people are about dogs and how easily manipulated they are by lazy journalists and dense politicos who are in turn being manipulated by the 'press sluts' behind the whole thing.

I note the headline has changed to 'dog' now but of course it's too late. A proper headline would be "The 'pit bull' attack in San Jose was NOT a 'pit bull' attack - we messed up". Of course I expect to see a headline like that in my lifetime...yuppers.

Tonight, the 'dog' is to be 'euthanized' - another thing that really bugs me. It isn't being euthanized. The dog will be killed or put to death. Face it.

And of course, the biggest non-surprise of all - the dog had a history of aggression , which seems to merit yet another headline because there's nothing like trumpeting the obvious to make a point, eh?

Happy New Year to you and your filthy dogs from me and mine.

"History of aggression"? But that can't be possible --- it was a "family dog"! [eyeroll]

Happy New Year to you and yours! To tell the truth, my pit bulls are only really filthy in the summer -- it's a bone-chilling 57F degrees outside this evening, so no mud for us. The border collies are filthy year round ;~)