Because they pay lip service to the dog/human bond, and at the same damn time help to arrange a massacre.

Because they have a script. Because they've spent years rehearsing it.

"I think the HSUS is now permanently on my shit list[...] What utterly scummy, disgusting, hypocritical behavior."
[John Sibley]

Because Sue Sternberg is their pit bull "expert."

Because they don't know squat about dog behavior, and don't care to learn.

Because ACOs and/or shelter workers in Wilkes County, NC were forced to kill 146 dogs, including some 60 puppies, in a single day. Because a foster home that had nursed sick puppies to health was ordered to return the pups for killing. Because the pup in the post below never had a chance.

And because Wayne Pacelle, John Goodwin and other HSUS apparatchiks didn't "euthanize" a single dog themselves. Wayne and John didn't even have to watch. Michael Vick, take note: you are not in their league when it comes to killing dogs.

Who gets to do the awful deed; the dirty work? The low-wage shelter workers who have no say in the matter; usually the same people who have cared for these dogs, who've gotten to know the dogs and have seen for themselves how truly wonderful most of them are. How are they feeling right now? I think I know. [Bad Rap]

Mighty "humane" of you in every respect, wasn't it, HSUS? How proud and happy you must be. Here's one you missed: 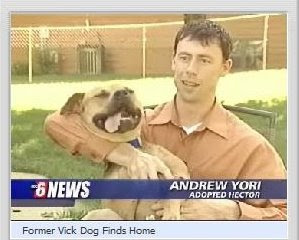 Numb [Bad Rap]
HSUS and the Ongoing Campaign to Kill "Rescued" Bust Dogs [YesBiscuit!]
HSUS in its own words. [B-More Bulldogs]
Court Order Issued to Euthanize Seized Dogs [Best Friends]
The Death of Hope at HSUS [Nathan Winograd at No-Kill Nation]
Dogs get death sentence [John Sibley]
TIME TO TAKE THE 'HUMANE' OUT OF HSUS [Caveat]
The answer is "kill", now what's the question? [KC Dog Blog]
Of all the things I'm glad I'm not [Save the pit bull, save the world.]
Posted by Luisa at 11:59 PM

Here is another one they missed!
www.TrinitythePitbull.com

Awesome post!
Thanks for saying EXACTLY what we are ALL THINKING!

In case you feel like spreading the word, feel free to grab a widget — which links, btw, to Luisa's blog.

A video tribute to the slaughtered Wildside dogs
http://www.youtube.com/watch?v=wDSyIBxat7c

Great post! HSUS does kill our beloved pets! When will America wake up and stop supporting this terrorist group and killing machine known as the humane society of the united states?