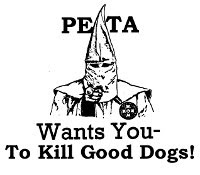 The American Language Association has announced the winner of its coveted "Doublethink" Award, presented to the individual or group which best illustrates the act of holding two contradictory beliefs simultaneously and fervently believing both. From today's press release:

1) that all pit bull-type dogs should be killed by animal control workers rather than evaluated on an individual basis and offered for adoption — thereby promoting not merely a type of profiling based entirely on appearance, but a form of canine "genocide" as well; and

2) that the American Kennel Club, a dog registry and dog show licensing group, is similar to the Ku Klux Klan, a hate group with 'a record of terrorism, violence, and lynching to intimidate, murder, and oppress African Americans, Jews and other minorities and to intimidate and oppose Roman Catholics and labor unions.'

"The ALA further wishes to recognize PETA's imaginative use of Ku Klux Klan imagery and ideology during Black History Month — an action that helped to corroborate PETA's true-believer syndrome in the view of the judges.

"This is the second time that PETA has received an ALA award. Founder Ingrid Newkirk was honored in 1989 with the "Most Inaccurate Definition" Award for defining symbiosis as 'enjoyment at a distance.'"

Heh heh heh. Those cranks at Peta sure know how to rack up the honours. Go, Ingrid, go!

The old 'symbiosis' thing is still good for a laugh every time they trot it out.

Well, gee -- all due respect to the ALA, there seems to be a much more stark and clearer example of PETA holding two immiscible thoughts at once: That "ethical treatment" that recognizes "animal rights" can include the God-like power of deciding which animals are worthy to live or die. Seems to me if they have rights, ya gotta ask them what they want!

(Though I admit it's sadly amusing that the term "genocide" makes the most sense, etymologically, in describing what PETA is doing to pit bulls if you grant them human-like rights, as PETA demands.)