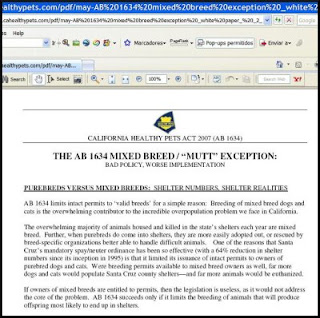 AB 1634 limits intact permits to ‘valid breeds’ for a simple reason: Breeding of mixed breed dogs and cats is the overwhelming contributor to the incredible overpopulation problem we face in California. The overwhelming majority of animals housed and killed in the state’s shelters each year are mixed breed. Further, when purebreds do come into shelters, they are more easily adopted out, or rescued by breed-specific organizations better able to handle difficult animals. One of the reasons that Santa Cruz’s mandatory spay/neuter ordinance has been so effective (with a 64% reduction in shelter numbers since its inception in 1995) is that it limited its issuance of intact permits to owners of purebred dogs and cats. Were breeding permits available to mixed breed owners as well, far more dogs and cats would populate Santa Cruz County shelters—and far more animals would be euthanized [...]

With no breeding standards, there are no objective criteria for animal control officers to use to determine if a person is breeding mixed-breed dogs or cats responsibly. Mixed-animal breeding is largely random with unpredictable outcomes and often without much thought with what will be done with the offspring. In AB 1634, the legal requirements that a person must meet to posses [sic] an unaltered dog or cat demonstrates a pattern of commitment and an adherence to a serious hobby.

If owners of mixed breeds are entitled to permits, then the legislation is useless, as it would not address the core of the problem. AB 1634 succeeds only if it limits the breeding of animals that will produce offspring most likely to end up in shelters.

"The legislation is useless" if owners of mixed breeds are intitled to intact permits? Heh. This just in:
The Santa Cruz County Code does not "limit its issuance of intact permits to owners of purebred dogs and cats."
Read it for yourself. See Title 6: Animals, and be sure to check out Section 6.10.050 [Unaltered animal certification]. This section looks a bit daunting at first, but it makes sense. Forget AKC papers and a show "title": any crippled bulldog has those. Instead, Santa Cruz sets standards for the owner. If you let your dogs run loose or otherwise demonstrate that you shouldn't be left in charge of a goldfish, you can't have an intact permit for little Felony.
This afternoon someone from the AB 1634 crowd discovered the mistake ["Santa Cruz gives intact permits to mutts?!"], and the AB 1634 Mixed Breed white paper was pulled from the bill's official site. The link's still good, though. Santa Cruz also has a full exemption for stockdogs and LGDs. And your dog doesn't have to be old or ill in order to get a veterinary exemption.
Why do the "Healthy Pets" spinmeisters keep telling us that the Santa Cruz law is the greatest thing since sliced bread, and the model for AB 1634, when it looks as if they've never really read it?
And how did these people wind up crafting legislation for the entire state?
Posted by Luisa at 8:11 PM