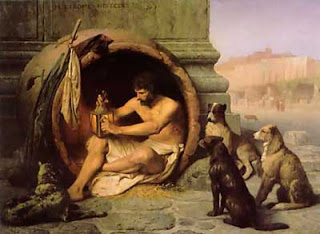 Diogenes
If you're tempted to play fast and loose with dog bite stats and JAVMA articles, please reconsider. Put the borrowed material in quotes. Don't try to disguise your own musings as part of a scientific study. Cite your sources. Have a shred of integrity.

Someone at the AB 1634 official site has taken the outstanding JAVMA Task Force report, "A community approach to dog bite prevention," pulled a few paragraphs from the introduction, cobbled them together, added a sub-heading ["Intact Dogs"] the original report lacks, and prefaced it all with a paragraph of his or her own creation, presenting mandatory spay/neuter as a solution to the dog-bite problem.
There is nothing to indicate where the AB 1634 fallacies end and the excerpts from the JAVMA report begin. A note at the foot of the page implies that the entire thing is taken from the JAVMA Task Force report.

Here's the introductory paragraph, courtesy of a "Healthy Pets" ghostwriter:

Spaying and neutering results in significant public health and safety benefits, particularly the occurrences of dog bites and the transmission of rabies and other communicable animal diseases. It is well documented that unaltered dogs are three-times more likely to attack humans and other animals. California suffers the nation’s highest occurrences of dog bites, animal attacks and attack-related fatalities in the nation and children are the most common victims. (Centers for Disease Control)

Does California suffer the nation's highest occurrences of dog bites? It's a good guess, since we have so many people, but the truth is that no one really knows how many California residents -- let alone animals -- are bitten by dogs, since 1) many bites are unreported, and 2) those that are reported have never been organized in anything approaching a meaningful way. The state with the highest number of attack-related fatalities? Last year it was Texas, with five dog bite-related fatalities to California's one. Florida had three. In 2007 Texas has had four dog bite-related fatalities. There have been none this year in California.

Yes, children are the most common victims of dog bites --- a statistic that may actually have come from the CDC.

"Spaying and neutering results in significant public health and safety benefits, particularly the occurrences of dog bites and the transmission of rabies and other communicable animal diseases." According to the Task Force report, "[Rabies] vaccination has reduced confirmed cases of rabies in dogs from 6,949 in 1947 to 126 in 1997." Are intact dogs more to blame for the transmission of other diseases? Who knows? Source, please.

"It is well documented that unaltered dogs are three-times more likely to attack humans and other animals." Documented where? One 1991 report [Wright JC. Canine aggression toward people: bite scenarios and prevention, Vet Clin North Am Small Anim Pract 1991;21:299–314] indicated that intact males were responsible for 70% - 76% of reported dog bite incidents, but the JAVMA report adds that "the sex distribution of dogs inflicting unreported bites is not known."

For what it's worth, the Texas Department of Health Zoonosis Division 2002 Severe Animal Attack and Bite Surveillance Summary says: "While the exact proportion of sterilized versus intact dogs in the overall canine population in Texas is unknown, a study of the reproductive status of almost 25,000 dogs conducted by the Zoonosis Control Division of the Texas Department of Health in 1997 revealed that 2,788 (23%) of male dogs and 3,756 (31%) of female dogs in the sample had been surgically sterilized. The sample data were drawn both from animal shelter records of dogs which were licensed and from dogs which had been impounded in animal shelters. When comparing the sex and reproductive status of the study population with 1,520 dogs involved in severe bites for the five-year period 1998 - 2002, the following conclusions may be made: spayed and intact females appear to bite at about the same proportion as their prevalence in the overall population; and intact males appear to bite at twice the rate of neutered males." [Italics mine.]

Texas was the only state to compile and publish annual Severe Animal Attack summaries, and no longer does so.

The JAVMA Task Force report states: "[A] dog’s tendency to bite depends on at least 5 interacting factors: heredity, early experience, later socialization and training, health (medical and behavioral), and victim behavior." Reproductive status doesn't rate a mention in this statement --- and in fact the Task Force report in all its seventeen pages never once suggests mandatory spay/neuter as a means of reducing dog bites.

What the JAVMA report does say: "Owners and future owners must be educated about their unique set of responsibilities, which include appropriate pet selection, providing quality nutrition, housing, and medical care, compliance with confinement and licensing requirements, appropriate behavioral training, and supervision of interactions between dogs and children."

Now that would reduce dog bites.