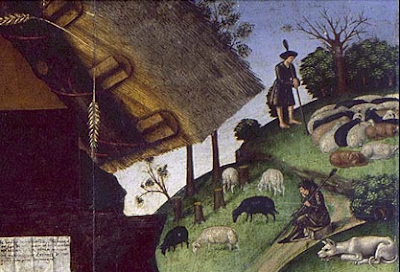 Detail from The Nativity, by Ghirlandaio [Benedetto Bigordi]. 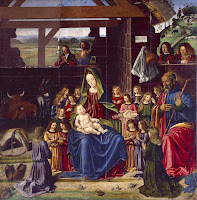 1490. This painting was made before there was a New World, before Shakespeare, before Quixote, before Cortés. Boabdil was still living in the Alhambra. Outside Al-Andalus, most Europeans were illiterate -- and most, I read somewhere, lived and died without ever traveling more than a few miles from the place they were born.

In England, the wolf had been all but extinct for more than 500 years.

Our shepherdes dogge is not huge, vaste, and bigge, but of an indifferent stature and growth, because it hath not to deale with the bloudthyrsty wolf, sythence there be none in England, which happy and fortunate benefite is to be ascribed to the puisaunt Prince Edgar, who to thintent ye the whole countrey myght be evacuated and quite clered from wolfes, charged & commaunded the welshemë (who were pestered with these butcherly beastes above measure) to paye him yearely tribute which was (note the wisedome of the King) three hundred Wolfes. Some there be which write that Ludwall Prince of Wales paide yeerly to King Edgar three hundred wolves in the name of an exaction (as we have sayd before.) And that by the meanes hereof, within the compasse and tearme of foure yeares none of those noysome, and pestilent Beastes were left in the coastes of England and Wales.

The dog in The Nativity is not of indifferent stature. I imagine that if you were transported back to that time and that hillside, the dog would attack you. Downhill, in the stable, the burro and the ox are more attentive than most of the angels, and there is a frog: symbol of resurrection.

[Artwork from the most excellent Exposition Mantegna at the Louvre - H/T Le Divan Fumoir Bohémien.]
Posted by Luisa at 12:07 AM