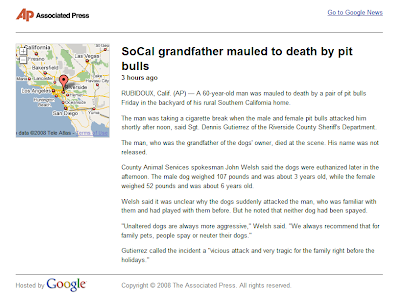 Wrong and wronger.
I could beat my head on rocks. Two dogs killed a man this afternoon in a dusty, unincorporated little 'burb off the 60 Freeway west of Riverside. A family lost their grandfather the week before Christmas. And the torch-and-pitchfork crowd of breed-banners will bring of the stupid, as they always do, and make me fear for my good dogs.

Like most fatal dog attacks, today's was "a perfect storm of bad human-canine interactions — the wrong dog, the wrong background, the wrong history in the hands of the wrong person in the wrong environmental situation." [That's Randall Lockwood's concise definition, from this article.]

The first hundred or so Google News results were all "SoCal grandfather mauled to death by pit bulls," and the story, with that headline, ran on news websites from Los Angeles to Houston, Jerusalem and Australia. Thanks so much, AP. Just before midnight the dependable Riverside Press-Enterprise ran their [vastly superior] report:

Rubidoux man mauled to death by own dogs

Two dogs mauled their 60-year-old owner to death Friday afternoon when he stepped into the backyard of his Rubidoux home to smoke, officials said.

Gerald Adelmund was declared dead at the cream-colored house in the 5700 block of Kenwood Place after deputies pulled him inside, said Riverside County sheriff's Sgt. Dennis Gutierrez.

"This is an unfortunate, very tragic accident," Gutierrez said.

He said he did not know why the dogs attacked Adelmund or who dragged him into the house.

The dogs were described as a 4-year-old, 107-pound male, part pit bull and part mastiff, and a 52-pound female pit bull, about 6.

The dogs were euthanized Friday by the Riverside County Department of Animal Services, with the permission of Adelmund's relatives, and are being tested for rabies, said Animal Services spokesman John Welsh.

The family also authorized euthanizing the female's nine puppies, but it wasn't clear Friday if the puppies had been killed, Welsh said.
[...]
Other neighbors said they have been afraid of the dogs for months and described them as vicious.

Josie Peña, who lives in the house behind Adelmund's on 29th Street, said that two small pit bulls the family bought a few months ago fought each other, and would growl and snap at her family through the chain-link fence that divides their property.

She said Adelmund's large male, which he owned for years, was always playful but became more aggressive when the other dogs arrived.

"I haven't gone out in my backyard for three months because I can't stand the way they are," Peña said.

So we have a backyard breeder, several backyard dogs [unsocialized, untrained, iffy temperaments], nine puppies: the wrong dogs, "the wrong background, the wrong history in the hands of the wrong person in the wrong environmental situation." What a needless tragedy. And while there is never a "better" time for such misery — the week before Christmas. Damn.
Posted by Luisa at 11:50 PM

The local report is indeed excellent because it gives some insight into what really happened.

Intact male, bitch with puppies, other dogs around - sounds like an ideal situation - not. On researching fatalities, I do see a thread that relates to intact dogs of both sexes, puppies and/or a bitch in heat. Then a (usually) kid blunders into the situation and the result is tragic.