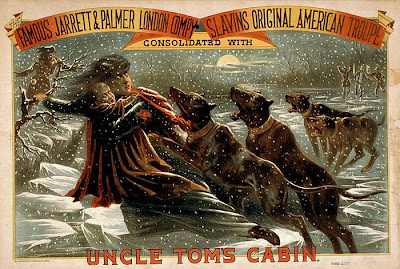 Eliza crossing the Ohio River, pursued by Genuine you-know-whats.
Fellow James Thurber-addict Carol [FrogDogz] has pointed out that for Thurber's generation — not to mention his parents' generation — the monster dog that tore people to shreds, that took hold with its fearsome jaws and never let go, was the bloodhound. Really: the friendly, slobbery bloodhound.

Remember when a girl could be ruined by a book? Back in the 1800s a dog could be ruined by the theater. The bloodhound's reputation tanked after the publication of Uncle Tom's Cabin: a book I have never actually read skimmed today that contains a scene, or so I thought, where a runaway slave, her child in her arms, tries to cross the frozen Ohio River with a pack of vicious bloodhounds in hot pursuit. I know about this scene because my parents had in their library an amazing picture book of American history, with an image of a theater poster for Jay Rial's Ideal Uncle Tom's Cabin. Actually, the poster reads Jay Rial's Genuine Trained Bloodhounds. And in smaller letters, below the illustration: With Jay Rial's Ideal Uncle Tom's Cabin. The artist was Matt Morgan. From Bandwagon:

Matt Morgan, a leading lithographic artist of the period, joined the firm [Strobridge, "synonymous with circus posters"] in 1878, after spending five years with Leslie's Weekly as a cartoonist. Morgan's arrival brought the creation of the first Strobridge multiple-sheet poster, in the form of a 16 sheet [outdoor poster]. The subject was "Eliza Crossing the Ice."

I can find no reproduction of this poster online, and will have to scan it the next time I'm downtown. The book's reproduction of the poster is in black and white. The dogs are big, entirely lifelike and and vividly believable, with close-cropped ears and the slick coats of a pit bull or an American bulldog. They look absolutely ferocious, even if you are not an impressionable eight year old. The caption: Eliza's race across the Ohio River, shown in an Uncle Tom's Cabin theater poster, was often duplicated in real life. One Negro woman who was caught on the Ohio side cut her baby's throat as they were carried back to slavery. [Author Harriet Beecher Stowe exaggerates the separation of slave children from their families, complained a critic: Louisiana law clearly states that “Every person is expressly prohibited from selling separately from their mothers the children who shall not have attained the full age of ten years."]

In the book, as it turns out, there are no dogs chasing Eliza across the frozen river. Stowe never mentions bloodhounds in Uncle Tom's Cabin [thank you, Project Gutenberg and Control+F], and she refers to Simon Legree's slave-chasing animals as bull-dogs, a familiar type. But theater impresarios of the 1800s guessed correctly that nothing would sell tickets like man-eating bloodhounds, with the possible exception of Genuine Man-eating Siberian Bloodhounds, so the dogs became central to stage productions of Uncle Tom's Cabin, and the breed became famous for viciousness and unpredictable savagery.

All images in this post are from the web site Uncle Tom's Cabin & American Culture: A Multi-Media Archive. 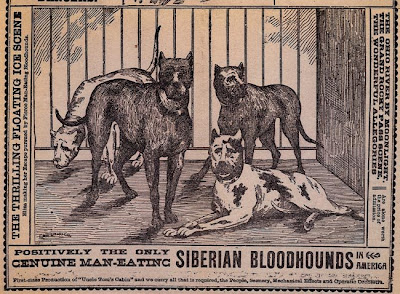 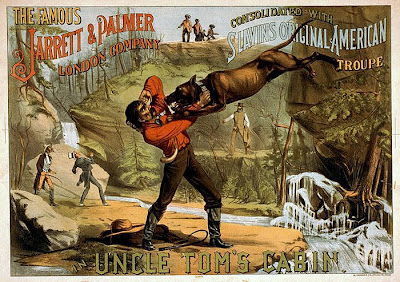 Another scene not found in the book. Are those Mexican bandits up on the cliff? Because that would be awesome. 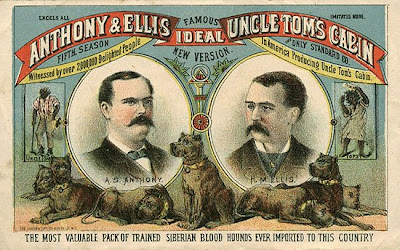 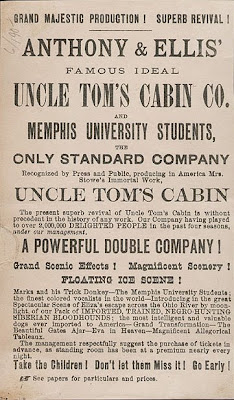 One is left speechless.

You had to be there: 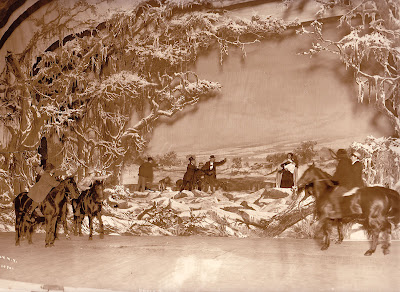 [File under Disbelief: Willing Suspension of.]
Posted by Luisa at 11:49 PM

I decided to do a search on 'Siberian Bloodhounds' and came up with very few results. One, this article! Two, an article from an 1882 edition of the New York Times about a 'Siberian Bloodhound' who "was a source of great alarm to the residents,' especially when he "showed such a formidable array of teeth." After biting two people, he is taken to the police station and destroyed by strychnine poisoning. The link to that colorful article is here http://query.nytimes.com/gst/abstract.html?res=9A02EFDD123BE033A25753C1A9659C94639FD7CF
The other link with 'Siberian Bloodhound' in it is from the Wikipedia page about dogs, a small snippet claiming that Siberian Bloodhounds are what is now the Great Dane; though I saw nothing on the Great Dane page confirming this, nor have I ever heard this bit of info. I have never heard of a Siberian Bloodhound until today, in fact...............
I have read Uncle Tom's Cabin, and though I don't remember any Mexican Bandits, I agree that would be awesome!!! Perhaps a new production is in order...

Karen Delise talks a bit about this in her book Pit Bull Placebo. I found it utterly fascinating.

I just learned of another interesting fact - the turn of the century version of the fearsome Pit Bull?

Spitz breeds. They were considered 'savage' and of 'impure blood', and rabies outbreaks at the turn of the century were frequently blamed on 'Spitz Dogs'. Dog catchers would regularly round up Spitz type dogs when rabies (or hydrophobia) scares were in full force. Pseudo scientific articles of the time were full of pontification on the propensity of the 'savage races' to spread disease.

linskyktty: good find! The particolor ones do have a Great Dane look. Interesting that everyone involved seemed so sure about the breed ID. Here [I hope] is the link again: A SIBERIAN BLOODHOUND.; AFTER BITING SEVERAL PERSONS HE DIGESTS THREE GRAINS OF STRYCHNIA.

Janeen, it must have been this production. Featuring Mickey Mouse as Topsy.

All Dachshunds hate me, and I fear them.

Carol -- to say nothing of the human propensity for scapegoating [sigh].

Yes they look like Danes or early Dobes. Karen D goes through all the 'bad' breeds from the 1800s to today in quite a bit of detail in the Pit Bull Placebo.

Like Katie, I found the information about Uncle Tom's Cabin fascinating.

And isn't that news searching on Google some fun now? Dog bless the internet!

Found your blog after being bought a Christmas pressie of a book 125 years of Westminster Dog Show in which there are a couple of pics (one a lithograph of Siberian Bloodhounds,shown at Westminster!!
I live in the UK, breed Alaskan Malamutes and generally love dogs of any kind, hence the book, bought from a library sale I believe. I had never heard of such a dog, but obviously they did exist :):)