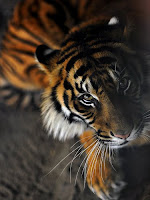 Last week both Esquire and GQ published big stories on the Zanesville, Ohio zoo massacre. Read both articles, if you have time, but if you only have time for one [and even if you think you don't], read Esquire's version. Staff writer Chris Jones establishes a sense of unease, of dread and sorrow, and builds on it, and makes everything about that grim event very real and deeply affecting. Jones has said that he hoped to achieve the "spare beauty" of police reports from that night, and he has done that. He also wanted to write "something that would scare the shit out of people," and he's done that, too.

GQ's Chris Heath takes a different approach, and covers more ground. He writes about the police operation, details the life and misadventures of zoo owner Terry Thompson, and interviews others in Ohio who keep exotic animals. Heath's report is as thorough as anyone could wish, and would have been a perfectly tolerable effort, if only Chris Jones hadn't written such a corker of a piece on the same event for Esquire.


The following links have to do with 1) the work of creating a story, and 2) the race between GQ and Esquire to get a long-form Zanesville article in front of the magazine-buying public. Those not interested in the behavior of competing publishers and competitive journalists should probably give these links a miss.

Photo above: Sumatran tiger, ueno zoo tokyo japan, by children of the neon god on Flickr.
Posted by Luisa at 11:22 PM

Both articles are good (and long). I do think that I prefer the Esquire article, in the quality of writing and in the ground covered.

I remember sort of hearing about the story as it broke, speculation that it was PETA that had murdered the guy and let the animals free, stuff like that. I get that lions and tigers are cool, really I do, but have no idea why somebody who loved them would want them in a cage in the backyard, and not in a big open space where they can live.

That story was one more reason people shouldn't OWN exotic animals. Too many irresponsible people think it's cool to have things like that then lose control.

Living in Ohio, I heard about that story for weeks. I felt bad for the officers involved as they didn't have much choice in their actions.
Dave

There are for more irresponsible dog owners than exotic ones, and far more fatalities and injuries caused by pet dogs than exotics. If animals should be banned for public safety, then dogs over 30 or so pounds need to be the first to go.

Unless its okay for children and adults to be mauled and killed by dogs multiple times per year, but not by a tiger. Not sure why dogs killing people is more acceptable.