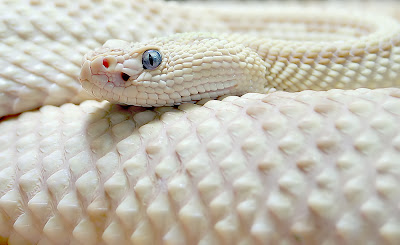 Photo by Kai Rösler. Click for big.
An albino morph of Crotalus basiliscus from Mexico, one of the largest rattlesnake species. This individual is at the San Diego Zoo, where it was photographed by Kai Rösler. Yes, Klapperschlange means rattlesnake in German.

See the pit between the nostril and the [icy cold] blue eye?

What makes [members of the subfamily Crotalinae] unique is that they all share a common characteristic: a deep pit [hence the name "pit viper"], or fossa, in the loreal area between the eye and the nostril on either side of the head. These loreal pits are the external openings to a pair of extremely sensitive infrared detecting organs, which in effect give the snakes a sixth sense that helps them to find and perhaps even judge the size of the small warm-blooded prey on which they feed.[3]

The pit organ is complex in structure and is similar to, but much more highly evolved than the thermoreceptive labial pits found in boas and pythons. It is deep and located in a maxillary cavity. The membrane is like an eardrum that divides the pit into two sections of unequal size, with the larger of the two facing forwards and exposed to the environment. The two sections are connected via a narrow tube, or duct, that can be opened or closed by a group of surrounding muscles. By controlling this tube the snake can balance the air pressure on either side of the membrane.[2] The membrane has many nerve endings packed with mitochondria. Succinic dehydrogenase, lactic dehydrogenase, adenosine triphosphate, monoamine oxidase, generalized esterases and acetylcholine esterase have also been found in it.[3] When prey comes into range, infrared radiation falling onto the membrane allows the snake to determine its direction.[2] Having one of these organs on either side of the head produces a stereo effect that indicates distance as well as direction. Experiments have shown that, when deprived of their senses of sight and smell, these snakes can strike accurately at moving objects that are less than 0.2°C warmer than the background.[5] It would seem as though the pit organs work like a primitive pair of eyes, although it is not known whether the snake experiences this sense as a visual image or in some other fashion.[6] Regardless, it is clear that these organs are of great value to a predator that hunts at night. [Source, with footnotes.]