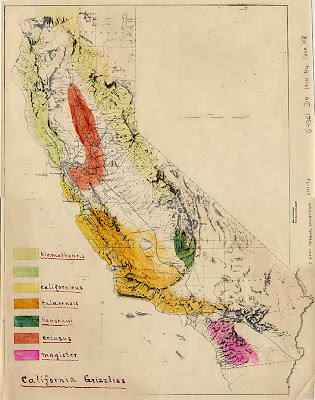 C. Hart Merriam's hand-colored map shows the distribution of the seven subspecies of the California Grizzly he identified and described.
Grizzly bear kills handler — on Earth Day! Paramedics arrive — from Big Bear City! Front-page article in — well, you get the idea. As they say, the Wheel of Karma has many spokes. From the L.A. Times:

Friends and colleagues of an animal trainer killed by a performing bear called it a "freak accident" Wednesday and said the 700-pound grizzly should not be euthanized. The animal, they said, did not intend to kill the bear expert.

"The same thing he was doing I have done a hundred times. We wrestle the bears in a loving way," said Joel Almquist, an animal trainer who has worked extensively with Rocky, the 5-year-old grizzly who killed 39-year-old Stephan Miller on Tuesday with a single bite to the neck.

"This bear has never shown aggression," Almquist said. "It was a flash bite, a real quick . . . bam. Unfortunately, we are built like tissue paper compared to them."

Diana Guerrero is familiar with the people who run Predators in Action, and has much more on this tragedy over at her Ark Animals blog. Lots of photos of the Rocky the grizzly and handler Randy Miller here.

"Perhaps few animals have suffered more from persistent and relentless warfare waged by man than this formidable Bear."

At one time there were more grizzlies in California than anywhere else in the continental U.S. Our native monarch is extinct now: the last wild grizzly in California was killed in 1922.

The following images and quotes were taken from the Bancroft Library's great Bear in Mind exhibit on the California Grizzly. There's a terrific book available as well. Read it and weep. 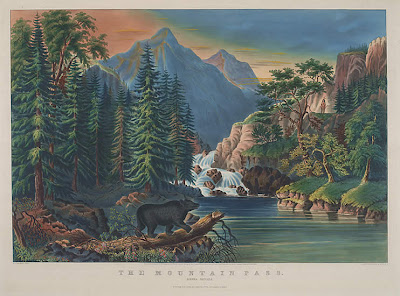 "[In 1844 we] crossed over to what is now called [Big] Bear Lake - before arriving at the lake capturing a village, the people of which had all left except two old women & some children.

On evening of the 2nd day arrived at the lake - the whole lake & swamp seem’d to be alive with bear; the 22 young Californians went out in pairs, and each pair lassoed one bear and brought the result to the camp, so that had at one & same time 11 bear - this prompted me to give the lake the name it now bears ...

On the return by way of Bear Lake, the same 22 men that went with me to that lake repeated the feat of bringing eleven bears to camp - making 22 killed on the trip." Don Benito [Benjamin Davis] Wilson, Observations on Early Days in California: manuscript, 1877. 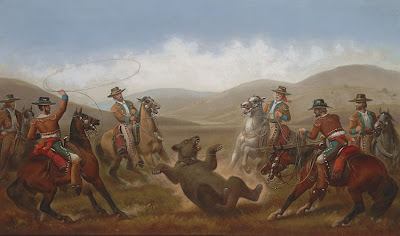 " ...High up on the waters of the San Joaquin, in California, many of these animals have been killed by the miners now overrunning all the country west of the Sierra Nevada. John James Audubon, Rev. John Bachman, The Quadrupeds of North America, 1851-54. 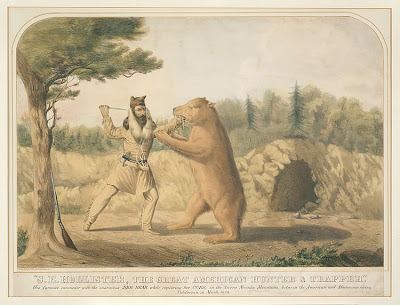 "S. E. Hollister, the Great American Hunter & Trapper: His Famous Encounter with the Enormous She Bear While Capturing Her Cubs in the Sierra Nevada Mountains Between the American and Mocosume Rivers, California, in March 1853."

"I shot that year, as before stated, 45 grizzlies, not counting those that got away in the brush, most of them no doubt fatally wounded, but one of my rules was never to go into a thicket if I knew it contained a bear.

I killed some very large ones and one in particular whose skin I sold to one of the trading vessels. It was much larger than any bullock’s hide they took on board... When a she bear with cubs is found, it is best to shoot the old one first and the young ones can be shot at leisure, as they will not leave the mother...

At this time there was no sale for bear skins, so that we never took the trouble to skin them...

I think I must have killed, on this coast, at different times, upwards of 200 grizzlies." George Nidever, manuscript: 1878.

The grizzly-as-symbol is all that's left. Check out these crate labels from eBay: I want this one. Bid here. No, I don't get a commission. There are still big ranches in Orange County, believe it or not. Make a bid on this label. 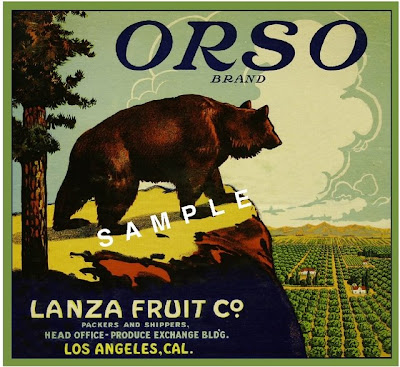 My hometown used to look just like that. Make a bid.

i have this weird thing about bears- one part of me is seriously obsessed with them and thinks they’re the coolest thing since sliced bread and then the other part is deathly afraid of them. Grace Bonney, Design Sponge.

[Is Grace Bonney me, only with cooler stuff?]

That's my sis on the left, reading at the cabin. No grizzlies lurking outside, but there are black bears [Ursus americanus] galore in the San Bernardinos. Our Big Bear Lake electrician back in the day kept a pack of Plott hounds to scare off problem bears for the State Fish and Game people. After an adult black bear strolled through the Cedar Lake dining hall during a seniors get-together, his Plott pack chased the bear all night, from Cedar Lake down Clark's Grade to Seven Oaks. One heck of a run, I'm telling you.

I'm going to buy these most excellent posters for the cabin. The artist is Scott Hansen of San Francisco: 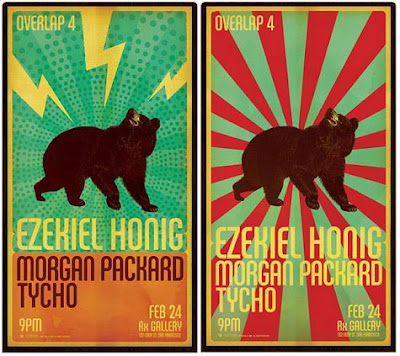 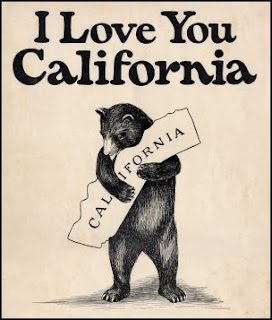 A very tragic story, that of the magnificent Grizzly bear in California.

It always irks me when I go out to visit my Dad that the state landmark signs use a Grizzly as their mascot - since they so heartlessly exterminated them. Seems wrong, somehow, to put them on the signs - I wonder if it's due to regret or just an unawareness of how callous it seems to those of us who actually care about other animals.

Thanks for the mention. Yes, one of the stories around here is about the grizzly round up--that is actually how Big Bear Lake got the final name.

Rocky will not be euthanized but there is going to be additional investigations into the matter.

I spent my teens and early 20's in the mountains of N. California. I was a frequent hiker/backpacker and even spent a year living in a tepee in a remote area. I also spent much of one year in my early 20's living and working in the Alaskan bush.

Bears were something we took very seriously back then. I've had a number of encounters with black and grizzly bears, all of which I (and my dogs) survived unscathed through a combination of good luck, common sense and respect.

Bears aren't pets. I know a woman who is a tiger trainer. She completely understands that EVERY day she works with the cats she agrees to risk her life. I'm quite sure that the man who was killed by the bear did so as well. And that he was happy to accept that risk.

For some great stuff on working with wild animals, check out books written by Heini Hediger. They are well worth searching for.