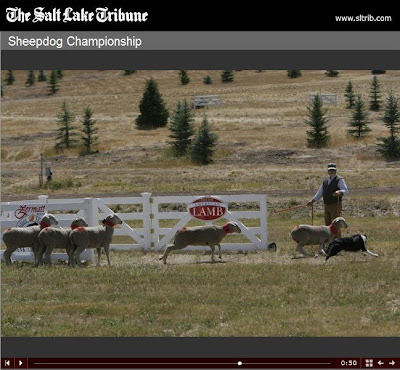 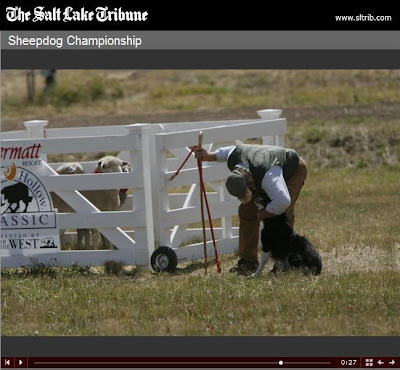 First: Bill Berhow and Pete (Yay!)
Second: Bev Lambert and Bill
Third: Amanda Milliken and Ethel
All scores here.
Screen caps are from the Salt Lake Tribune's coverage --- be sure to watch the slide show featuring Pete's winning run. And look at Bill standing at the pen! Moves like this and this are common, but Bill looks about as desperate as a man waiting for a bus.
For a selection of excellent photos from Soldier Hollow, visit the gallery at the Border Collie Boards.
*************
Trials City! Wednesday, September 5 is the third and final day of the Welsh National: for full coverage, see the ISDS site. Beginning on Wednesday in Colorado is the Meeker Classic, with 120 dogs competing for a $20,000 purse. The UK's International Sheepdog Trials 2007 will run from September 16 - 18 in Burnchurch, Kilkenny, Ireland, and North America's National Sheepdog Finals will be held in Gettysburg, Pennsylvania from September 18 - 26.

*************
The Olympian Online has a good article about Lawdogs founder Diane Jessup and the eight pit bulls working with the Washington State Patrol as bomb- and drug-detection dogs:

Jessup said she picks certain pit bulls that might have the right stuff for law enforcement training by measuring how good they are with people and whether they enjoy playing with a toy. It's important for a pit bull to love toys because they're used as rewards during training, she said.

Jessup is checking whether she can get custody of any of the dogs that were seized from Vick's kennel. One of the members of a team assembled by the American Society for the Prevention of Cruelty to Animals to evaluate the surviving dogs from Vick's kennel has worked closely with Jessup, and she is going to determine whether any of the dogs would be appropriate for LawDogsUSA, Jessup said.

Another video to check out, too.

An Iraqi staffer in the L.A. Times' Baghdad Bureau writes:

I hated to send Lucky away.

Lucky is my dog. He's black and reddish-brown, with white on his paws and black spots on his face -- probably a German shepherd mix. He looks a lot like the dogs that search our cars when we go into the Green Zone.

We got him six years ago when he was a puppy. But my house is on a highway where there is a lot of shooting, and I told my brother the gunfire was so intense that even the dog was terrified. He said Lucky should live with him in his district, Mansour, which is quieter...