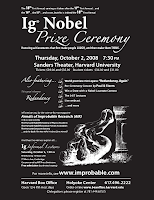 Not for nothing have the Ig Nobel awards been called — by Nature, no less — "arguably the highlight of the scientific calendar." A selection of this year's winners:

NUTRITION PRIZE. Massimiliano Zampini of the University of Trento, Italy and Charles Spence of Oxford University, UK, for electronically modifying the sound of a potato chip to make the person chewing the chip believe it to be crisper and fresher than it really is.
REFERENCE: "The Role of Auditory Cues in Modulating the Perceived Crispness and Staleness of Potato Chips," Massimiliano Zampini and Charles Spence, Journal of Sensory Studies, vol. 19, October 2004, pp. 347-63.

PEACE PRIZE. The Swiss Federal Ethics Committee on Non-Human Biotechnology (ECNH) and the citizens of Switzerland for adopting the legal principle that plants have dignity.
REFERENCE: "The Dignity of Living Beings With Regard to Plants. Moral Consideration of Plants for Their Own Sake"

BIOLOGY PRIZE. Marie-Christine Cadiergues, Christel Joubert, and Michel Franc of Ecole Nationale Veterinaire de Toulouse, France for discovering that the fleas that live on a dog can jump higher than the fleas that live on a cat.
REFERENCE: "A Comparison of Jump Performances of the Dog Flea, Ctenocephalides canis (Curtis, 1826) and the Cat Flea, Ctenocephalides felis felis (Bouche, 1835)," M.C. Cadiergues, C. Joubert, and M. Franc, Veterinary Parasitology, vol. 92, no. 3, October 1, 2000, pp. 239-41.

Click here for the complete report on the 2008 Ig Nobel Awards, brought to you by the Einsteins at Improbable Research. [H/T: Ars Technica.]
Posted by Luisa at 10:29 AM

Email ThisBlogThis!Share to TwitterShare to FacebookShare to Pinterest
Labels: science