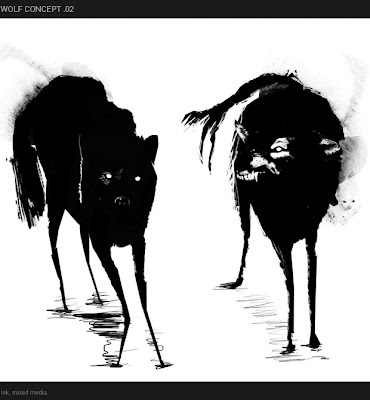 Wolf concept .02 by Chris Do and the BL:ND team for Gap.
The wolf is a compelling, complicated presence in human history and evolution. He's more controversial these days than ever: some people pay to hear wolf packs howl on winter nights in Wyoming, while not that many miles away other people grit their teeth and curse when wolves kill sheep or a favorite dog.

The wolf's little cousin, the coyote, is one of my favorite creatures on earth. I was alone on a snowy trail in Yosemite once when three coyotes, big ones in thick winter coats, loped into a meadow maybe forty yards away, pointed their muzzles at the gray sky and whooped and shrieked like the devil incarnate. It was beautiful. Those three sounded like a dozen, loud and wild.

I love to hear coyotes sing when I know my animals are safe. The Daily Coyote melts my heart. But the suburban coyote that trots out of the Verdugo Hills and tries to carry off a toddler? Out of the C. latrans gene pool, you. The sheep-killing coyote? Toast. [Not that traps and bullets make a real dent in the coyote population: the irony here, I'm convinced, is that we're making the species stronger and smarter by killing the inept ones.]


Livestock guardian dogs, relatively new to North America, are old hands at protecting flocks of sheep from predation and other hazards: 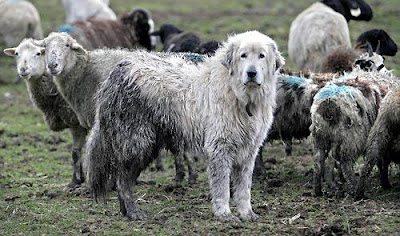 "Kodiak, a livestock guard dog, stays with what's left of the flock of sheep he had protected from a barn fire near Carnation on Thursday. Kodiak's fur was singed while he stayed between the fire and the sheep, later running to a pond and sitting in mud." [Kodiak, a Great Pyrenees, belongs to Diane Pagel. Photo by Steve Ringman for the Seattle Times.]
Cat Urbigkit, Wyoming sheep rancher and author, has shared notes and photos of her LGDs with Stephen Bodio of Querencia: see the posts Flock Protectors and Coursing with Sheepdogs. I know zip about LGDs so can't comment on breed preferences in the U.S., but I've noticed that many flock owners prefer crossbreds. I think Maremmas are beautiful: you can read about Julie Poudrier's new Maremma — a rescue — here.

Meanwhile, to the northeast: is it a wolf? Is it a coyote? It's thriving, whatever it is, according to the NY Times:

Amid much fanfare this year, the federal Fish and Wildlife Service declared the western Great Lakes gray wolf successfully recovered from an encounter with extinction and officially removed it from the endangered species list. Under the protection of the Endangered Species Act, the wolf boomed in population to 4,000 in Michigan, Minnesota and Wisconsin today, up from just several hundred in northern Minnesota in 1974.

But the victory celebration was premature, according to two evolutionary biologists, Jennifer A. Leonard of Uppsala University in Sweden and Robert K. Wayne of the University of California, Los Angeles. The historic Great Lakes wolf did not return intact from the edge of oblivion. Instead, the scientists report in the online edition of the journal Biology Letters, it hybridized with gray wolves moving in from Canada, coyotes from the south and west and the hybrids born of that mixing.

Janet McNally of Minnesota writes that she needs six to eight LGDs at the minimum to keep her sheep safe from all that hybrid vigor. Click on Guardians at this link to read more about her crossbred LGDs.

Shepherd Bill Fosher notes the recent appearance of a wild wolf in Massachusetts, and suspects there will soon be "a movement to reintroduce this top-level predator into its former range in New England":

There's historical evidence that my part of New Hampshire was, in fact, home to wolves. So if there's going to be reintroduction, it will probably happen around me. I hope that the wildlife biologists have the common sense to work with livestock producers before the killing starts. The can have us working with them, or they can have us working against them. It's as simple as that, and it's entirely up to them.

For more information on wolves, see the following sites:

For more on the coyote, see this detailed Wikipedia article, and check out the book by J. Frank Dobie, Voice of the Coyote. It's an old fave.