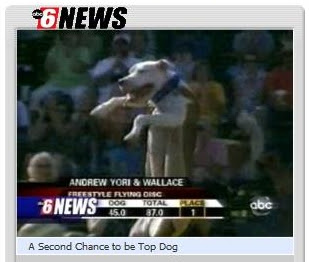 Andrew Yori holds a beaming Wallace aloft as the crowd gives the new top dog an ovation.
Yay Wallace and Roo! Congrats to the new flying disc champs at the Purina Incredible Dog Challenge National Finals [stands, applauds]. If you missed the show Sunday you can catch it again on ESPN2 Monday, January 14. [Today, yikes.] Check the listings here: I think it will be on at 11:00 AM. You can also watch the video [source of the screen grab above] at this link. Excerpt:

"We actually have to be careful about what cities we go to compete in because some cities don't allow pit bulls so we always have to check that before we go,” says Clara.

But with a chance to compete, Wallace proved his disc-catching skills and came out as the top dog.

"It’s just some of the best times of my life just being out on that disc field with him; just having the whole world melt away and just have him and me connecting through the training that we've been doing. You just can't put words on it,” says Andrew.

A happy dog and proud owners who are glad their best friend got a second chance.

So cool. And how I love this, from the article's "Comments" section:

As a more-or-less typical owner (retired engineer/MBA) of an American Pit Bull Terrier, I'm always glad to see news coverage of the best the breed has to offer. Thank you, KAAL, for countering some of the hysteria generated by less responsible news outlets.

Wallace has a terrific website [and what a crying shame that several pages need to be devoted to the fight against BSL in Wallace's home state of Minnesota. State Representative John 'Boundless, Staggering Ignorance' Lesch wants a state-wide ban of Akitas, Chow Chows, Pit Bulls and Rottweilers. If I've said it once, I've said it a million times: ignorance, hysteria and urban legend are bad grounds for legislation. Mr. Lesch, call the CDC, for crying out loud].

Under "Wallace vids" in the WallaceThePitBull.com gallery be sure to catch the Rocky-style training video: it's ossum. There is nothing cuter than a pibble in a little sweatsuit. Foster dog Bosley is featured in another good vid ["Human Aggression"] under "Pit Bull Myths." There are videos all over Wallace's website, so brew a pot of tea, get comfortable and enjoy.
Posted by Luisa at 12:39 AM

Wallace and Roo are even better in person. I met them this last year at the Thorntonfest frisbee competition, where they beat the hometown favorites (current and past national champion teams) and even put on the best Pairs routine I've ever seen.

Thornton overlooks Denver, notable as a BSL hellhole city, so the win was all the more spectacular as a slap in the face to stupid legislation.

Roo is not a typical dog owner, sorry. Typical owners don't do much of anything with their dogs, let alone train them in frisbee catching high flying freestyle routines and then travel around the country with them to compete.

The take away is that Roo and Wallace are notable for what they do, not who/what they are. Roo proves that you don't need a Border Collie to excel in dog sport, and Wallace proves that "Pibbles" don't need violence to show they've got the right stuff to compete for trophies and hearts.

I was so bummed that I forgot to watch yesterday, even though I already knew about Wallace's victory. He's such a cool dog!

I met them in Kansas City this past September, even have a pic of me with Wallace (he's the cute one)at the hotel, which had a few dogs at the bar that weekend :>O

They came for the great Canine Legislation Conference and there was a show in the park across from the hotel on Sunday.

Brought tears to my eyes, watching Wallace and the other dogs giving it all they had and asking for more.

It was cool that some local punks with their dogs drifted over to watch along with a lot of other people. I was hoping the message would sink in - you have to be a lot tougher to do what Roo and Wallace do than you do to just strut around acting like a jerk.

I'm hoping Frisbee catches on with the kids - it's cheap, fun, you can do it any level and you always have the superstars like Wallace and Roo to keep you jumping higher - a lot higher!

What, you mean Wallace didn't 'snap' and rampage through the crowd, eating toddlers and dismembering old folks?

I bet there were some disappointed media types there.

I guess they could work with this as a headline:

I'm sure someone suggested it to their editors. Either that, or they referred to him as "Wallace, the Labrador Retriever cross".

I hear you, Frogdogz. I hold media more responsible than gasbag politicians for our current plight. They've become lazy, reporting by rote.

What Roo and Clara are doing is heroic - they are out there showing people what's what.

Wallace is pretty busy, he wouldn't make a good housepet, that's for sure. He's in the right place with the right people changing minds at events large and small.

Maybe the media will pick up the change in the weather, late as usual but what could be more controversial than denying the popular mythology about 'pit bulls' and other breeds?

There were other dogs there - one had been returned to a shelter 4 times until she got into the right hands - amazing agility dog.

One big problem is that due to superficial information, people don't know what kind of dog they should have. I don't mean breed or shape, I mean personality - how much drive, how busy, how hard-headed, how sensitive, how reactive, etc. There's a lot more than looks to picking the right dog and I wish there was more information out there - in the media especially since they have the audience - that is actually useful to people considering dog ownership, especially for the first time.

Can you remember the last good article on socialization and training you saw in the mainstream press?

Christopher, thanks! [runs off to blog]