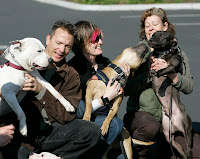 Yes, I am still beaming about Hector. He's the middle dog in the photo to the left, a happy shot for the ages by Associated Press photographer Eric Risberg. [Click on the photo for a larger view.] View this photo and many more by visiting the BAD RAP blog: they have a late-Saturday-night roundup of the best news coverage, and you can feel their relief that the dogs are finally, really safe and that the press is starting to get it.

Four posts with Hector's photo: one, two, three, four. I sure can pick em. [sprains arm patting self on back] You could call it a crush. 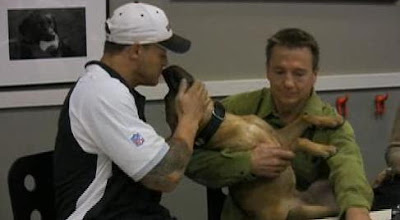 A dog that made my heart turn to water -- the twin of my muddy girl in the right sidebar: 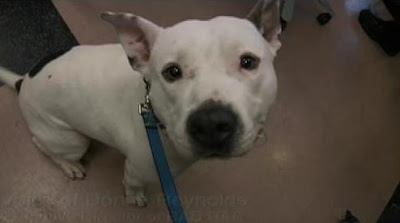 [Both screen grabs from the Contra Costa Times.]

Richmond, Va. - Holding signs that read, "Report Dogfighters" and "Dogs Deserve Justice," next to photos of dogs who have been mauled in fights, PETA members will rally outside the federal courthouse in Richmond on Friday as Williamsburg-area resident Oscar Allen is sentenced on dogfighting charges. Allen's sentencing is related to the case that has already seen fallen Atlanta Falcons quarterback Michael Vick and three codefendants receive prison terms.

[...]
"Vick's heinous dogfighting operation has been busted, but there are others just like it across the county," says PETA Vice President Daphna Nachminovitch. "We're calling on people across the U.S. to report dogfighters and for police and prosecutors to send them to jail."

"Holding signs that read, 'Dogs Deserve Justice'"? [Stop laughing, dammit!] Yes, that's the same Daphna Nachminovitch who told the press, "These dogs are a ticking time bomb. Rehabilitating fighting dogs is not in the cards. It’s widely accepted that euthanasia is the most humane thing for them." Yes, the same Daphna Nachminovitch whose organization wants all pit bulls dead. Ironic? Ironic doesn't even come close. Talk to the paw, Daphna: a bad day for PETA has been a very, very good day for some very good dogs.
Posted by Luisa at 10:57 AM

I think you missed this one in your Hector list:

Have you seen this video of a sheep keeping a staffy bull off the porch? It's very cute (but it's not mine).
http://www.youtube.com/watch?v=K_VY4AfQ1Pc