Blessing of the Animals, Part II 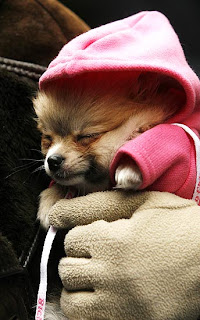 Wake me when it's over: a pup sleeps during the blessing of the animals in Madrid [slide show]. Click on photos to enlarge.

Blogger QoE [knitter of green socks I covet, and parent of kids that fit in Christmas stockings] wondered, "So how did Minnesota get this mixed up with St. Francis? We do the blessing of the animals in October." ["Frozen holy water," heh.] As it turns out, lots of churches have a Blessing of the Animals on October 4, St. Francis' feast day. You can see the 2007 schedule here. That last website, you'll note, is run by Franciscans of the order of friars minor.

"Order of friars minor" has a cool Sword in the Stone, Brother Cadfael vibe, and in fact the Franciscans brought the tradition of blessing animals -- on St. Anthony's feast day -- to the New World not too long after the days of real knights and squires and crusades and codes of chivalry. The custom of blessing animals on St. Anthony's Day, based on the saint's legendary compassion for his fellow creatures, was already established in Europe and soon became tradition in Latin America.

You'll notice in the photo on the right that Anthony is portrayed, as he generally is, with a pig at his feet [photo by Gregorio Fernández].

Legend says that whenever the saint saw an injured animal he would heal it, and on one occasion he was approached by a sow seeking help for her blind piglets. After Anthony cured their blindness the sow never left his side and protected him from harm. Another legend says that when Anthony visited fellow saint and hermit Paul in the desert, a crow carried food to them in its beak, and when Paul died, lions and other animals helped Anthony prepare the grave. Velázquez illustrated both scenes in one painting, below. 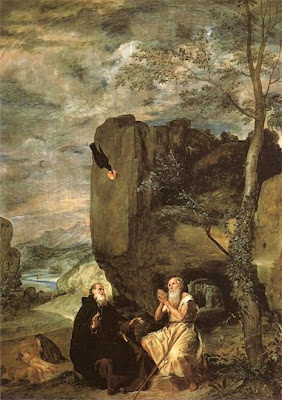 Francis of Assisi was born some 800 years after Anthony of the Egyptian desert, and founded what is now one of the largest male religious orders in the world. He called the animals "my brothers and sisters," and he loved nature, believing that if one loves God one must love all God's creation. How perfect for the age of ecology and environmentalism, no? With encouragement from the friars minor, many churches here in the U.S. and in Latin America now bless the animals on October 4, St. Francis' Day. And good luck finding an Anthony of Egypt medal for your dog here in the States. My pups have St. Francis medals in their Quiet Spots [even though my own first allegiance is to the Parking Space God, and yes, I know I'll be a valet parking attendant in hell for that. At least the dogs should be OK].

For those interested in blessings of hunting hounds, horses and more, Diana Guerrero has written an entire book on animal blessings. Read more here.

I bought the St. Francis medals for my pack online from a store that no longer carries them -- great little medallions. Other St. Francis medals are available from Diana Guerrero's site, though I'll offer a correction: the St. Anthony/St.Francis medal actually shows St. Anthony of Padua, a hugely popular Franciscan contemporary of Francis, in a characteristic pose with the infant Jesus.

To paraphrase Francis, May the Lord [whoever your lord might be] give you and your animals peace and all kinds of good blessings.

Hey, thanks for the mention and the links! It was a nice surprise to discover your post.

I forgot all about the slide show and keep looking for new posts and articles of interest.

Let me know if you find any more gems!