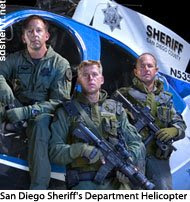 Barney Fife, we hardly knew ye: San Diego Navy SEALS sheriffs don't mess around.
Here's a story about a loose dog that charged a cop. Not a garden-variety loose dog, either, but a fast, medium-sized loose dog with no collar, a loose dog barking like the furies and charging with hackles high and teeth bared like a crocodile's — a loose dog with malicious, or at least tumultuous intent. All this happened in the middle of the night, and I know these details because the dog involved was my landshark.

Flashlight farmers have to feed very late sometimes, and on the night in question I drove to the farm an hour or so before midnight to feed the sheep. As always when I feed after dark, I took some dogs. Friendly Twig, shy Gray and landshark Lu rode shotgun, and I was too lazy to put on their collars for the 20 minutes we'd be away from home.

I turned on the barn light and fed and watered the ewes, and when I was done I turned off the light and started back to the truck. All of a sudden the dogs charged ahead of me, barking the way dogs bark when they mean trouble. I'd left the truck headlights on, and through the glare of the headlights I could see the shape of a man. He was standing next to the truck door.

That was scary, but only for a split second. Much scarier: I realized he was a cop. Gun and badge. Gun. And my dogs were circling and the landshark was roaring and diving at his legs.

This happened in a fraction of the time I'm taking to tell it, of course. Believe me when I say that never in history have three sheepdogs been called off and loaded into the safety of a truck cab faster than I loaded up my three girls that night.

I must have babbled something to the cop about raising sheep and feeding late, but I can't remember what I said.

What I do remember is this: the police officer didn't reach for his gun. He stood still. He was quiet and calm while the dogs were barking and circling and the landshark was lunging. After the dogs were put up he checked my ID and explained that a neighbor had seen the barn light and called the police. There had been some minor vandalism in the area, and he was walking around the buildings to make sure everything was all right. He was polite and professional. I drove home shaking like a leaf.

Yes, I live in Pleasantville. I'm lucky and I know it, and I count my blessings whenever I read about incidents like these:

[T]he shooting of dogs by police has become troublingly common across the country. My beat as a journalist includes police misconduct, and I've noticed an increase in media accounts of police officers shooting the family pet—with a notable lack of remorse or disciplinary consequences. This sad trend appears to be a side effect of the new SWAT, paramilitary focus in many police departments, which has supplanted the idea of being an “officer of the peace.”


The raid on [Cheye] Calvo's home was actually the second in 10 months in which police in Prince George's County burst into a private home during a drug raid, shot and killed the family dog, then realized they had raided the wrong house. But national statistics on police-involved pet shootings are difficult to come by. Randal Lockwood of the American Society for the Prevention of Cruelty to Animals recently told the Las Vegas Review-Journal he sees 250 to 300 incidents per year in media reports, and estimates another 1,000 aren't reported.

The Indianapolis Star reported that between 2000 and 2002, police in that city shot 44 dogs. A recent lawsuit filed by the Milwaukee owner of a dog killed by police found police in that city killed 434 dogs over a nine-year period, or about one every seven-and-a-half days. It's impossible to say how many of those were pets (versus strays), or in how many of those shootings the dog may have actually presented a serious threat to the officer or someone else. But in too many reported accounts of dog shootings, it seems doubtful that lethal force was necessary.

It is easy to imagine that some breeds of dog might legitimately pose a threat to police officers in volatile situations. But that Calvo’s two black labs posed any serious risk to an armored, heavily armed SWAT team stretches the bounds of credulity. The same can be said of a host of recent dog shootings in which a police officer said he felt “threatened” and had no choice but to use lethal force, including the killing of a Dalmatian (more than once), a yellow Lab, a springer spaniel, a chocolate Lab, a boxer, an Australian cattle dog, a Wheaten terrier, an Akita, and even a Jack Russell terrier. Not small enough for you? How about a 12-pound miniature dachshund? Or a five-pound chihuahua? [Source: Dogs in a Deadly Crossfire.]

Related:
Your tax dollars at work: "A lawless act by law enforcement"
Posted by Luisa at 8:57 PM

You shouldn't have to count your blessings. That's the way things are *supposed* to work.

Amen. Terrifying to think what the "quién es más macho" boys might have done.

Man, I got goosebumps just reading your story. We were talking yesterday at work about a local cop-shoots-dog story. What is it that they're so quick to discharge their weapons at dogs these days? Having your dog leashed, contained, even in your house is no guarantee anymore.

Police raided my exhusband's house. They aready arrested my son and was in cuatody for a bad pee test. They opened the door to his house, the dogs were sleeping. They scared the dogs by kicking in the bedroom doors. tHEY said the dogs were going to bite them. They shot my grandog 3 times and the other grand dog shot him with a bean bag gun and scared our lab into sesuries and left her in the back yard! This happened in Livermore ca. All for nothing. They need to be punished. My ex is a law abiding citizen and a good person! How much do you put on a dogs life for insurance reasons! This was a family member for 14 years! They were old dogs! We're so sad! I want them to pay for the suffering they have put us through! I need to know how much he can sue the police for the gods and our pain and suffering.