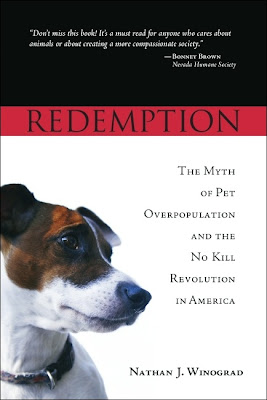 Nathan Winograd's new book is called Redemption, and it's a hot topic in bloglandia. From the book:

There is no breed of dog in America more abused, maligned, and misrepresented than the American Pit Bull Terrier. There is no breed of dog more in need of the humane movement’s compassion, in need of a call to arms on its behalf, and in need of what should be the full force of a shelter’s sanctuary. Many shelters, however, have determined that these dogs are not worthy of their help. They have determined that Pit Bulls do not deserve to live.

The more circumspect among them might not say so publicly. They may couch it in more benign terms, shifting the blame to others, claiming that no one will adopt them, convincing themselves that only a ban and death will keep them out of harm’s way, but the end result is exactly the same. By their actions, words, policies, and failure to speak out positively on behalf of Pit Bulls, they stoke the fire that has at its core only one end: their mass killing. To a breed abused for fighting, victimized by an undeserved reputation, relegated to certain death in shelters, add one more torment: those who should be their most ardent protectors have instead turned against them. The humane movement has joined the witch hunt. The very agencies whose officers seek out dog fighters and abusers in order to “save” Pit Bulls often relegate the dogs to locked and barren corridors away from public view with no hope of adoption, regardless of their temperament. Ultimately, all of them—the healthy and friendly ones, side-by-side with the hopelessly sick or vicious—are put to death.

In Multnomah County, Oregon, Pit Bulls are killed en masse in a shelter that claims it is near No Kill by using temperament testing to find reasons to fail Pit Bulls, creating a virtual de facto ban on the breed. In Denver, Colorado, they have been simply outlawed and executed. And People for the Ethical Treatment of Animals, the nation’s most outspoken animal rights group, has joined the battle to exterminate these dogs—demanding that all cities ban the breed, and that all Pit Bulls who enter shelters seeking sanctuary be killed.

Ending the tragic plight of the American Pit Bull Terrier should be among the humane movement’s most ardent goals. Humane groups must remind people that the Pit Bull’s misfortune is in finding itself the favored breed of the dog fighter at this time in history—a distinction shared at one point by the German Shepherd, Doberman, and Rottweiler. This is a distinction that will shift to another breed if Pit Bulls are banned but the scourge of dog fighting is not ended.

Rather than rally against an injustice which condemns an entire breed of dogs to death—literally hundreds of thousands of dogs a year—shelters have failed the Pit Bull completely. And one of those leading the charge is none other than the dog behavior expert championed by HSUS and NACA, Sue Sternberg. In her training video, The Controversial Pit Bull, Sternberg claims most Pit Bulls are aggressive to other dogs and cats and perhaps even children, a statement that flies in the face of Tompkins County’s experience. Sternberg goes further, claiming that even if they are friendly, they should not be adopted into homes with children because they are

"very strong, very powerful, the tail alone will cause bruises on a small child. And they have no boundaries, so when they go to kiss you, as my friend who used to do Pit Bull rescue [found out], knocked her front tooth out [and caused] $500 worth of bonding. Just saying hello."

Due to a strong, swishing tail and a freak accident involving her friend, the woman considered to be the foremost temperament testing expert by shelters nationwide says Pit Bulls should not be adopted by families with children. This point of view would be ludicrous if the end result—the slaughter of healthy, friendly dogs nationwide—were not so tragic.

In Tompkins County, by contrast, if one isolates “Pit Bulls,” a breed condemned by Sternberg as generally being aggressive to cats and other dogs and otherwise dangerous to kids, nearly nine out of ten of them—86 percent—passed temperament testing and were adopted in 2002. It is also worth noting that Sternberg’s shelter, where she claims the Pit Bulls who come in are “unadoptable” is also in Upstate New York—a three-hour drive door-to-door from the Tompkins County SPCA. The point is worth underscoring. In Tompkins County’s animal control facility, 86 percent of all Pit Bulls impounded were found to be friendly to kids, other dogs, and cats, and were all adopted. This occurred in the same region of the country, in the same state, a few short hours drive from the shelter of the nation’s expert who says the vast majority of Pit Bulls in her shelter should be killed. It is a contradiction that can only be reconciled one way—Sternberg is wrong.

Not only does the experience of Tompkins County prove this point, national outside-the-shelter testing does, too. According to the American Temperament Test Results for 2004, the three breeds commonly referred to as “Pit Bulls”—the American Pit Bull Terrier, the American Staffordshire Terrier, and the Staffordshire Bull Terrier—had a combined passing rate of 86.6 percent, virtually the same as found in Tompkins County, and, interestingly, a pass rate higher than the Golden Retriever.

The hypocrisy of this kill-oriented sheltering philosophy finds no better example than in Denver, Colorado, where in 2005 local authorities began enforcing a law making it illegal to have a Pit Bull as a pet. Banning Pit Bulls or any breed of dog is geared to overkill by definition because—media hysteria to the contrary—the vast majority of dog bites occur within the home by many breeds, with the dog biting a member of the family after some provocation, a different causal mechanism than the false image presented: an epidemic of free roaming Pit Bulls attacking unknown children or the elderly. As a result, a breed ban won’t stop the vast majority of dog bites. Nonetheless, Denver newspaper reports describe police officers seizing friendly pet Pit Bulls from homes on threat of arrest, again putting the lie to the claim that shelters are killing because of public irresponsibility.

While groups like the Fund For Animals whitewash the truth, saying that shelters are doing the “public’s dirty work,” the truth is more sanguine: the work is dirty, but it is not the public’s. In the case of Denver’s Pit Bulls, the lie is two-fold because people are not discarding them: government animal control and police agencies are taking cherished family members on threat of arrest—only to put the poor creatures to death. This is your American animal shelter, the one that blames you for the killing.

See Nathan Winograd's blog here. He read the passage above, bless him, during his visit to L.A. last week.
Posted by Luisa at 5:48 PM